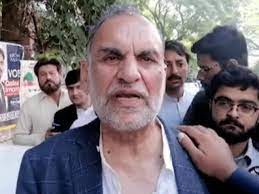 During the hearing of the petition, an SHC bench led by Justice Karim Khan Agha directed the Prosecutor General Sindh (PGS) to furnish the court with a reply by December 15.

The court also directed IGP  to submit a detailed report regarding cases against Azam Swati in the province.

Justice Agha issued the directives today during the hearing of the Perween Rahman murder case.

IGP Ghulam Nabi was present in the court when the judge asked about the multiple first information reports (FIRs) registered against the PTI senator for the same offence.

Swati has been in Sindh police’s custody for three days. He faces two cases for posting controversial tweets against senior military leaders.

He was arrested over a “highly obnoxious campaign of intimidating tweets […] against state institutions” by the Federal Investigation Agency (FIA) on November 27 from Islamabad and has been in detention since then — first in Quetta and now in Sindh’s Qambar.

Swati was taken into custody by Sindh police last week over two cases registered in Warah and Qambar police stations after the Balochistan High Court ordered the quashing of all cases against him.

During the hearing today, the SHC judge asked the IG Sindh to share details about the cases against Swati.

“We have heard that cases have also been filed against a former prime minister. How can multiple FIRs can be registered in one offence?” he asked.

Justice KK Agha said that there were Supreme Court verdicts in this regard.