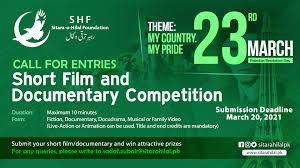 ISLAMABAD: Sitara-o-Hilal Foundation (SHF) on Friday announced a short film and documentary competition on the theme “My Country My Pride” focusing on Pakistan Resolution Day.

The aim of the competition was to raise awareness about the struggle of Pakistan and motivating patriotism in the county’s youth.

The willing students should submit an original film and documentary no longer than 10 minutes in duration on the theme of Pakistan Resolution Day.

The competition was open to all students across the country. Both individual and group submissions will be accepted. Form: Fiction, Documentary, Docudrama, Musical or Family Video (Live-Action or Animation can be used. Title and end credits were mandatory.

Every video submitted must be a final edited product: rough-cuts will NOT be considered for the selection.

All submissions must include closing credits with the following information: name(s) of the filmmaker(s), any participant(s), and stakeholder(s).

The entries should be submitted on the following means: Email your submission via WeTransfer to info@sitarahilal.pk or Mail your film on a USB or DVD at Sitara-o- Hilal Foundation.

The winners of the SHF Short Film and documentary competition would be chosen by a jury of professionals.

The first three winners will be given attractive prizes, ambassadorship, Membership, Social Media Coverage and Certificates.