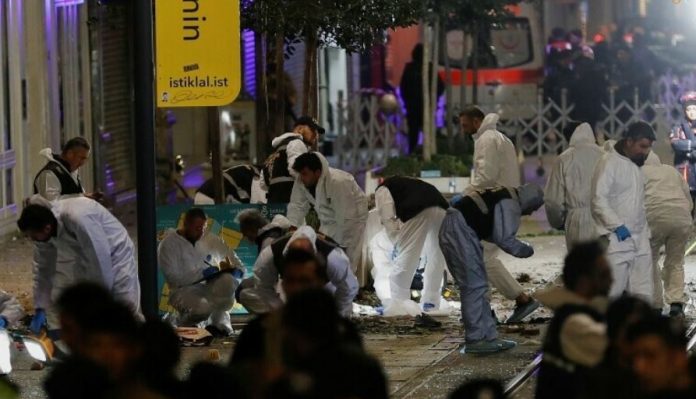 Six people were killed and 53 others were wounded on Sunday when an explosion rocked a busy pedestrian street in central Istanbul in an incident President Tayyip Erdogan called a bomb attack that “smells like terrorism”.

Ambulances raced to the scene on the packed Istiklal Avenue, which police had quickly cordoned off. The area, in the Beyoglu district of Turkey’s largest city, had been crowded as usual at the weekend with shoppers, tourists and families.

“I was 50-55 metres away, suddenly there was the noise of an explosion. I saw three or four people on the ground,” witness Cemal Denizci, 57, told AFP.

“People were running in panic. The noise was huge. There was black smoke. The noise was so strong, almost deafening,” he said. Parents swept their children up into their arms as they fled the area. Istanbul governor Ali Yerlikaya tweeted that four people died and 38 were wounded according to preliminary information.

A massive deployment of security forces equally barred all entrances, while a heavy deployment of rescue workers and police was visible.

A Reuters reporter saw a helicopter overhead and several ambulances in nearby Taksim Square.

“When I heard the explosion, I was petrified, people froze, looking at each other. Then people started running away. What else can you do,” said Mehmet Akus, 45, a worker in a restaurant on Istiklal.

“My relatives called me, they know I work on Istiklal. I reassured them,” he said.

The nearby Kasimpasa police station told Reuters all crews were at the scene but gave no further details.

Local media said crime inspectors were on the scene and Anadolu reported that the Istanbul chief public prosecutor’s office had launched an investigation into the blast.

The explosion occurred shortly after 4pm (1300 GMT) in the famous Istiklal shopping street which is popular with locals and tourists.

According to images posted on social media at the time of the explosion, it was accompanied by flames and immediately triggered panic, with people running in all directions.

A large black crater was also visible in those images, as well as several bodies lying on the ground nearby.

The Turkish Red Crescent said blood was being transferred to nearby hospitals.

Turkey’s RTUK regulator imposed a broadcast ban on coverage of the blast around an hour after it occurred.

“My condolences to those who lost their lives in the explosion on Istiklal Avenue,” Mayor Ekrem Imamoglu said on Twitter.