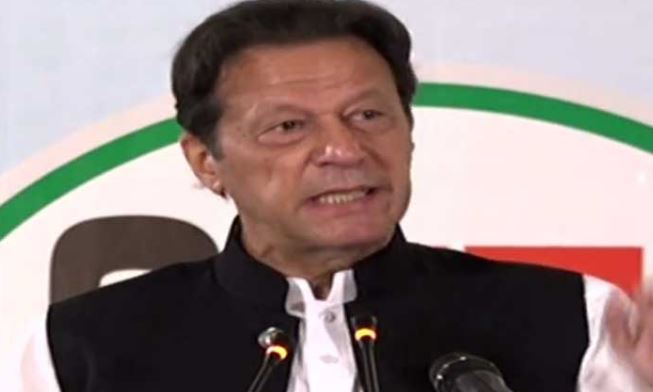 Addressing a seminar on freedom of expression organized by the Pakistan
Federal Union of Journalists on Saturday, he said that the leader
thinking himself all wisdom always fails.

“After Sri Lanka, Pakistan is at No 4 on the list of the countries going
to be bankrupt. Is the establishment not watching it? How much loss the
country is suffering due to the imported government?” he queried.

Imran Khan said that the powerful army is the asset of Pakistan and they
will have to protect it. “The Supreme Court has threatened me instead of
conducting investigations into the cipher, ordering that the Article 6
should be applied to me,” he maintained.

He said that the problems cannot be solved until bringing the two
families under the law. “Shehbaz Sharif who has been made the prime
minister faces the corruption of Rs16 billion. The illegal chief
minister is holding the by-election in Punjab,” he added.

The PTI chairman said that their economy would continue to go down until
political stability in the country. “Fair and immediate elections are
the only solution to all problems,” he concluded.

Imran Khan said that Pakistan is suffering brazen censorship in the
country’s history which was not even there during dictatorial regimes.

He emphasized that no society could progress without freedom of
expression. He said that he never tried to ‘bribe’ media nor that any
journalist was ‘picked up’ on his instructions but rather had ‘other
reasons’.

According to Imran Khan, the army contended that it was difficult to
prove charges on the terrorists in the courts which resulted in their
acquittal. “We wanted nobody in the country to go ‘missing’ . . At least
their families should know about their whereabouts.”

Subliminally pointing towards the powers that be, he said, “Everyone
makes mistakes.” However, he added that constructive criticism was
essential and opposed the practice of action against faultfinders on
even against ‘little’ criticism.

He said that a strong army was Pakistan’s requirement and feared that
the distance between the army and people is widening which he termed as
‘threatening’ if no remedy was taken for it.

The establishment needs to reflect to not rush to action against the
journalists and those criticizing the Pakistan Army as this practice was
tarnishing the image of the military.

He contended that it was the era of social media and the flow of
information could not be stopped. “Nobody can control social media,”
Imran Khan argued.

He pointed fingers at the establishment saying that it was supporting
the current setup in the country and the decisions were being taken
behind closed doors.

“First plan A is made and then behind these closed doors plan B is made
.. How could the decisions be correct if they will be taken in this
manner.”