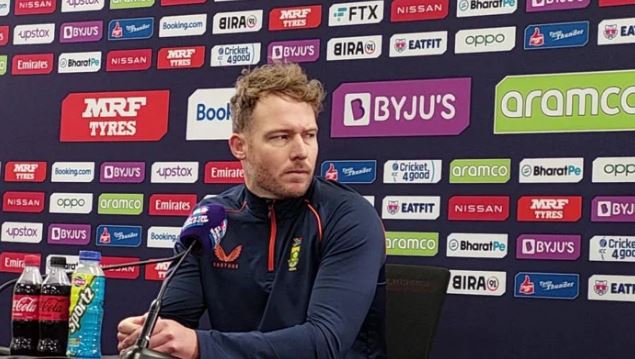 Speaking ahead of the game, David Miller said that Pakistan has very good match winners and they expect a fully charged Pakistan side to show up at its must-win game.

“Against Pakistan, you’ve got to make sure that you’re on your A-game as an opponent, so just making sure that we’re sticking to our processes and what has worked in the past to implementing it tomorrow,” he said.

“Pakistan are a great team, and they’ve got some serious match winners, but, we’ve just got to take it as it comes, and definitely the boys are up for it, and then I suppose Pakistan — it’s a must-win game for them, so they’re going to be coming and charging, and we’re definitely prepared for it,” said the middle order batter.

When asked if Pakistan’s struggle at the top order gives his team an edge over former champions, the 33-year-old said that Pakistan’s top order problems is an area South Africa can exploit.

“This game is all about confidence, and yeah, they haven’t probably performed the way they’ve wanted to, but they’re world-class players, and we’re expecting them to come out and bring their A-game and be up for the challenge,” the South African cricketer said.

“It’s by all means not just going in there and expecting to get them out first ball or early up. We’ve got to work hard for every wicket, and hopefully we can, get them early and put the Pakistan middle order under pressure a little earlier than later,” he concluded.

Pakistan play South Africa on Thursday in Sydney and must win their remaining two matches and hope other results go their way to stand any chance of making the semi-finals.