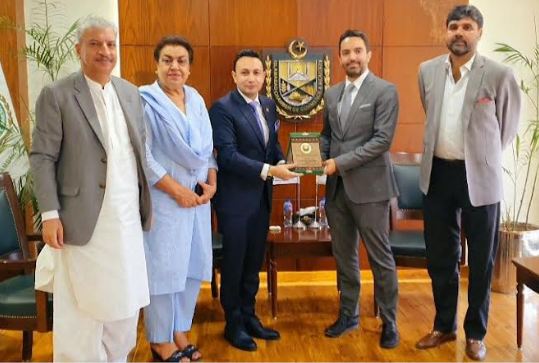 ISLAMABAD, SEPT 6 (DNA) – Spain and Pakistan have great potential to improve bilateral trade in many areas, which still remain untapped and businessmen of both countries should step up efforts to develop strong connectivity for promoting volume up to their real potential. This was stated by Aitor Santiago Garin, Economic and Commercial Attaché of Spain Embassy while interacting with the business community during his visit to Islamabad Chamber of Commerce & Industry.

He said that the current bilateral trade volume between Spain and Pakistan was quite low with the bulk of Pakistan’s exports to Spain confined to textiles products.

However, trade could be increased significantly by developing business linkages between the private sectors of both countries. He said that lack of awareness about Pakistani products in Spain was a major trade barrier, which should be addressed to enhance trade ties. He said that Pakistani fruits including mangoes have great potential for exports and Pakistani fruits exporters should focus on complying with the Sanitary and Phytosanitary (SPS) standards to capture EU market.

He said that Pakistan should develop easy trade dispute resolution mechanisms to attract more foreign investors. He said that Spain gives great importance to Pakistan and there was an equal opportunity for Pakistan to penetrate European trade markets. He assured that the Spanish embassy would cooperate with ICCI in further increasing trade and economic relations between Spain and Pakistan.

He said that Spanish cooperation in the tourism sector could help Pakistan to promote its tourism industry. He said that Pakistan was an emerging market for business and investment, therefore, the Spanish companies should consider technology transfer to Pakistan and explore JVs in our country to produce value added products.

They said that ICCI would be in touch with the Spanish Embassy to increase the bilateral ties and bridge the gap between the business communities of both countries. Both sides also discussed a wide range of areas to strengthen the trade ties between the two countries.=DNA