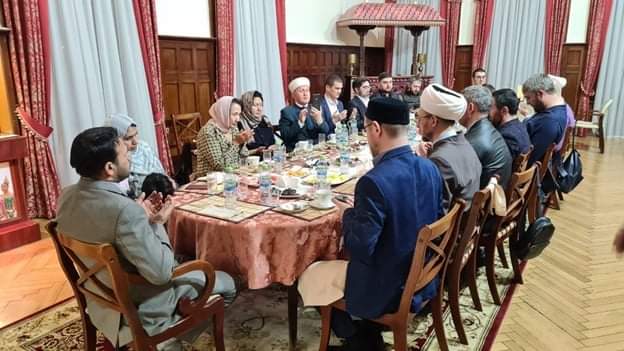 MOSCOW: Prof. M.D. Lamawansa, Deputy Head of Mission Mr. Mohamed Anas organized Iftar ceremony for the Chief Imam of Moscow Cathedral Mosque and the Muslim delegation comprised of Imams and representatives of business community. The event took place in the official Residence of Ambassador of Sri Lanka in Moscow.
In his opening remarks, Mr. Anas underlined the historically established friendly relations between Sri Lanka and the Russian Federation, and close ties between the Embassy of Sri Lanka and Moscow Cathedral Mosque, which stand too close to each other. The Minister – Counsellor highlighted that Sri Lanka is a multiethnic and multi-religious country, in which citizens belonging to different confessions live in peace and harmony, and are treated equally with the guarantee of the Constitution.
Ildar-hazrat Alyautdinov, the Chief Imam, who chairs the Spiritual Administration of the Muslims of Moscow, thanked for the invitation extended to the Muslim community represented by different nationalities to share Iftar with the diplomatic corp. The Imam quoted in his speech the importance of taking care of neighbours in Islam and mentioned that he witnessed today with the Sri Lankan friends and extended an invitation to Ambassador and the Embassy staff to pay a visit to the Mosque.
Both sides expressed readiness to enhance interaction based on spiritual ground and expanding the areas of common interest including Social sphere, education, charity, business and many others for collaboration.
The official ceremony was followed by Iftar and prayer. Further guests were invited to enjoy Sri Lankan cuisine and a culinary show.