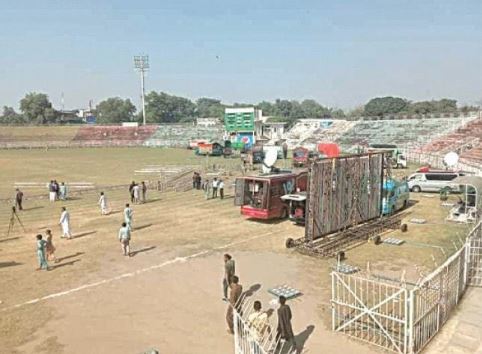 LAHORE: The opposition is confident about making its first rally in Gujranwala on Friday (today) a success with a claim that the event will lay the foundation for the ouster of Imran Khan’s government.

The recently-formed Pakistan Democratic Movement (PDM) — which comprises 11 parties including the PML-N, PPP and JUI-F — has vowed to turn the Gujranwala rally into a ‘big power show’, asking Information Minister Shibli Faraz to resign if the venue is jam-packed.

Mr Faraz had thrown a challenge to the opposition to fill the Jinnah Park since the government had allowed it to hold a public gathering there. “Tell us will you resign forthwith if the venue is full,” PML-N Senator Pervaiz Rashid asked the minister.

Gujranwala is a stronghold of PML-N, but the party is not banking on that fact alone. The PML-N leadership has mobilised its workers and supporters across Punjab and asked them to reach the venue while Maulana Fazlur Rehman has also committed to bringing a large number of his followers.

PPP chairman Bilawal Bhutto-Zardari arrived in Lala Musa in Gujrat at the residence of Qamar Zaman Kaira on Thursday evening. It is expected that he will lead PPP workers from there to the venue of the rally.

PML-N vice-president and former prime minister Nawaz Sharif’s daughter Maryam Nawaz announced that she would leave for the venue from her Jati Umra residence in Lahore at the head of a caravan. The PML-N’s Lahore chapter has been tasked with ensuring that a lot of supporters and workers accompany her to the venue.

Although she would leave in the afternoon, the party did not confirm whether she would reach the venue early in the evening. “Who knows how much time Maryam’s caravan takes to reach Gujranwala,” said a party leader.

PDM president Maulana Fazl will leave for Gujranwala from Jamia Ashrafia on Ferozepur Road, Lahore. The JUI-F leadership has directed its supporters to reach the rally venue directly.

“We have ensured that Friday’s power show is phenomenal as this will decide the fate of the PTI government. All leaders of the opposition are convinced that this rally will set the momentum for ouster of the government,” a senior PML-N leader told Dawn.

As a good number of PML-N leaders have already reached Gujranwala, the PTI government has placed a number of containers on the roads there, indicating its mood to block the way of as many opposition workers and supporters as it could. But the opposition is confident that with a large number of people heading towards Gujranwala, such barriers won’t be able to stop them from reaching the rally’s venue.

On the other hand, the administration removed all the banners and panaflex posters related to the opposition’s rally in the provincial capital on Thursday. The district administration of Gujranwala and Lahore remained on high alert to deal with any untoward situation.

According to an opposition leader, it has warned the administration that its supporters and workers may start a long march towards Islamabad if police create hurdles to stop them from reaching the venue.

All Pakistan Anjuman Tajran secretary general Naeem Mir said that it would have to take shelter under the umbrella of the opposition after facing frustration over the PTI government’s anti-trader steps like unleashing Tiger Force at them.

Meanwhile, the Lahore High Court sought a reply from the Punjab government on a petition by PML-N Lawyers’ Forum, which challenged the alleged arrest of party workers and placing of containers on the roads to obstruct the Gujranwala’s meeting of the opposition parties.

Advocate General of Punjab Ahmad Awais undertook before the court that no illegal action would be taken by the government.

The court directed the AGP to submit a detailed report on behalf of the government on Friday (today).

Deputy Commissioner of Gujranwala Sohail Ashraf granted an NoC to the PDM for holding the rally at Jinnah Park. He directed the participants of the public meeting to wear face masks and observe social distancing.

“As per the notification, the organisers are prohibited to allow the entry of members of banned outfits inside the venue and on stage… (and) their speeches are also not allowed. Slogans and speeches against the state institutions are prohibited,” it says.

Punjab police have already booked over 400 workers of the PDM, mostly from the PML-N, in different parts of the province for reportedly violating the Covid-19 SOPs during corner meetings.

Maryam Nawaz said Nawaz Sharif would also address the rally. The Pakistan Electronic Media Regulatory Authority has already imposed a ban on Mr Sharif’s speeches for being an absconder.

PML-N secretary general Ahsan Iqbal told a presser on Thursday that Prime Minister Khan had become unnerved over the PDM’s protest drive. “I would like to remind Imran Niazi that he had promised to give the opposition a container for protesting… now he will have to listen — ‘Go Imran, go’ — from 220 million people of the country for making their lives miserable,” he said.