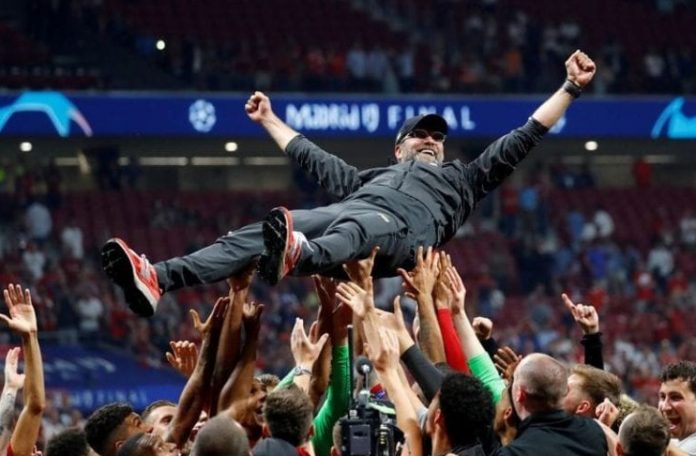 Liverpool are on the cusp of winning their first ever Premier League trophy and their stellar run has highlighted how manager Juergen Klopp transformed a club struggling to mount consistent title challenges into one of the best teams in the world.

With 27 wins and 82 points under their belt after only one defeat all season, red-hot Liverpool set a record-breaking pace to leave teams behind them in their wake and are six points shy of ending a 30-year wait for the top-flight title.

In 173 matches after adopting Klopp’s aggressive “heavy metal” approach, Liverpool have scored 2.15 goals per game compared to 1.9 under Rodgers. Their shot conversion rate has also gone up from 11.09% to 13.24%, according to Gracenote data.

“Liverpool have improved the quality of their chances under Klopp’s leadership,” said Simon Gleave, head of sports analysis at Gracenote.

“During the 2015-16 season in which Klopp took over, the average chance of a Liverpool goal attempt going in was 9.5% according to Gracenote’s statistical modelling. This season, that critical number sits at 12.8%.”

Much of that is down to Klopp’s lethal front three of Mohamed Salah, Sadio Mane and Roberto Firmino, who scored 38 goals and grabbed 20 assists to push Liverpool a whopping 22 points clear at the top.

Meanwhile, Trent Alexander-Arnold has redefined the role of a full back with 12 assists — second only to Manchester City’s playmaker Kevin De Bruyne who has 16.

In defence, Liverpool now concede 8.26 shots per match compared to 10.7 under Rodgers, with the drastic improvement largely due to the club-record 75 million pound ($92.85 million) signing of centre back Virgil van Dijk in 2018.

In 83 games since the Dutchman’s arrival at Anfield, Liverpool have lost only five times and conceded 56 goals — compared to 24 defeats and 100 goals conceded in the same period prior to the club securing his services.

“Since his debut in January 2018, the club have almost cut the number of goals they concede by half and have taken a third more points in comparison to the same number of matches prior to his arrival,” Gleave added.

As things stand, the European champions are on course to eclipse league records for most points in a season (100), most points at home (55) and most wins (32).