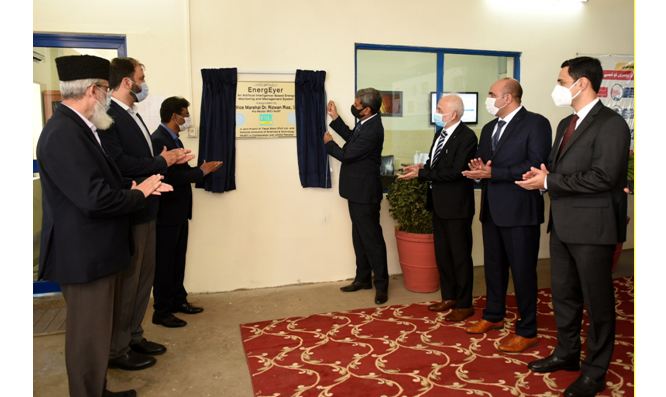 ISLAMABAD, SEPT 24 (DNA) – A formal inaugural ceremony of commissioning of “EnergEyer” —an intelligent Energy Monitoring and Management System (EMMS) at Fazal Steel (Pvt) Ltd was held. It was a collaborative project of National University of Sciences and Technology (NUST) and Fazal Steel under active technical support by United Nations Industrial Development Organization (UNIDO).

Dr. Iftikhar Ahmad the Principal Investigator (PI) of the project from SCME- NUST while explaining about the project said that EnergEyer was specially developed by NUST team for process industries by incorporating the concepts of Artificial Intelligence (AI), wireless communication, and cloud computing in the conventional Energy Management System (EMS), to manage the energy losses in the industry. He specially thanked his colleague Dr.Mian Ilyas Ahmad (Co-PI, RCMS)–NUST, for his immense contribution in the project and said that the EnergEyer was successfully tested and implemented in the MATCAST Plant of Fazal Steel Limited (FSL) and now showing positive results.

On this occasion, a plaque was unleashed by the Chief Guest Pro-Rector NUST Air Vice Marshal SI (M) Dr. Rizwan Riaz. The ceremony was attended by representatives of NUST, UNIDO and Fazal Group of Companies both Staff and Executives.

Mr. Masroor Ahmed Khan, National Project Manager Sustainable Energy REEE UNIDO, speaking on behalf of Ms. Nadia Aftab, UNIDO Country Representative shared his thoughts “UNIDO in Pakistan has an extensive and successful portfolio in industrial development cooperation. While UNIDO is providing technical support to Fazal Steel in its goal to achieve Energy Management System Certification ISO 50001, under one of its flagship projects on Energy Efficiency, it is heartening to see an effective collaboration between Academia and Industry being taking place”.

Pro-Rector NUST, while addressing the participants, said, “I am immensely thankful to FSL Group of companies for facilitating and investing in this research which would help to bring the advanced technology on a national platform. He also appreciatedUNIDO and Fazal Steel to join hands with NUST for this wonderful initiative. He put emphasis on the future collaborations with FSL Group of Companies”

Earlier, Mr. Saad Aziz Malik of Fazal Steel welcomed all the participants and thanked NUST and UNIDO for their contribution in the project. Hesaid that it’s a huge step towards encouraging the industry-academia relationship that would help us become self-reliant nation and we would be proud to call it “made in Pakistan” rather than importing technologies from abroad. He also appreciated his team efforts who are working tirelessly for the past years to make FSL group of companies one of the best among others.