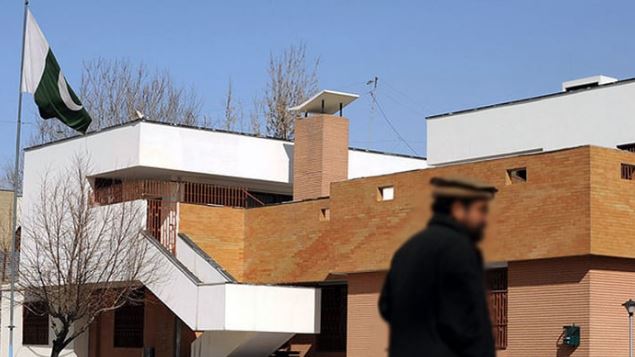 A day earlier, Nizamani escaped the assassination bid after the embassy’s compound in Kabul came under attack targeting the head of mission. However, a security guard, Sepoy Israr Mohammad, was injured in the attack while protecting the diplomat.

According to diplomatic sources, the suspect was residing on the 8th floor of the nearby building and had planted improvised explosive devices (IED) in three rooms on the same floor.

When the Afghan security officials arrived at the building, the suspect tried escaping, however, he was arrested.

The security officials also recovered an AK-47 rifle, a long-range automatic rifle, a sniper rifle and other weapons from the possession of the suspect.

The diplomatic sources further told Geo News that the police have also arrested another suspect. Meanwhile, the security guard — who sustained injuries in the yesterday’s attack — has been shifted to Peshawar.

Pakistan calls on Taliban govt to beef up security

Earlier today, Pakistan’s Special Representative for Afghanistan Mohammad Sadiq said that the Government of Pakistan will provide resources to further enhance the security of our diplomats following the assassination attempt at the envoy.

Taking to Twitter, Sadiq said that Pakistani security guard Sepoy Israr Mohammad, who sustained injuries in an attack for saving the mission head in Kabul, was taken to Combined Military Hospital (CMH) in a special plane last night.

“Sepoy Israr Mohammad, who took bullets on [the] chest to protect our Ambassador in Kabul was evacuated to CMH Peshawar last night by a special plane. Israr displayed extraordinary courage [and] devotion to duty: a salute to this brave son of the soil — a true mujahid. Get well soon Israr!” Moreover, Ambassador Sadiq said that Nizamani and his team are working in an “extraordinarily challenging situation”, stating that the security of members is to be prioritised the most.

“First and foremost, the Afghan Interim Government will need to beef up the security of our embassy and its personnel,” he added.