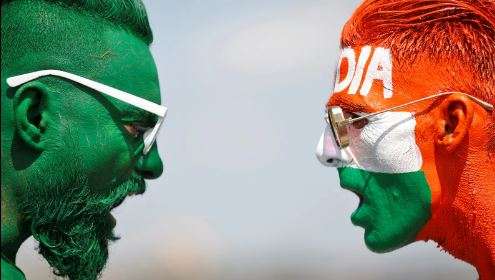 The most awaited cricket encounter is just a few days away. The hype of the arch-rivals’ clash spiked much before the commencement of the T20 World Cup. Fans are getting increasingly keener to see the action as the match-day draws closer. The high-octane clash will unfold at the most iconic Melbourne Cricket ground (MCG) in front of a packed crowd on Sunday.

So, all eyes are on the blockbuster to see how India’s experienced batting line will counter the Pakistani guns that recently gathered momentum by winning the T20I tri-series.

The scheduled battle between old rivals is highly anticipated by both cricket nations and its significance cannot be expressed through words as it will be watched by hundreds of millions around the world, on televisions in remote villages as well as on big screens in crowded cities.

Due to political tension between the two countries, the neighbouring country’s board (BCCI) has constantly sidestepped playing bilateral series with Pakistan. That’s why the curiosity about this ICC tournament match between the rivals is so exaggerated. The global cricket body achieves record revenues from this megahit meeting.

Ever since the last bilateral series between both nations in 2012/13, the two sides have met each other 12 times across ICC and ACC formats.

Pakistan are currently ranked 3rd in the T20 International ranking. They enter the mega event following the tri-series win.

India, top-ranked in T20Is, also got a boost after winning the T20I home series against Australia and South Africa.

Pakistan fans will never forget the opening contest of the previous edition. Pakistan broke the 14 years losing streak to stun India by 10 wickets in Dubai. The honour was earned by the opening pair of Babar Azam and Mohammad Rizwan, who overpowered the fiery Indian bowling attack. Both of them played immaculate innings.

This time around the top contenders are also meeting at a neutral venue (Australia), and again Pakistan’s dominating duo is the biggest challenge for Rohit Sharma’s bowlers. We can’t wait to see how they tackle them. India has suffered a massive blow in the shape of the unavailability of Jasprit Bumrah due to a crippling injury.

The neighbouring countries clashed recently twice — in the T20 Asia Cup on the United Arab Emirates soil. India tamed Pakistan in their group match. But with a strong performance a few days later, Pakistan staged a magnificent comeback in Super 4s, overpowering the rivals.

Both countries took the advantage to confirm their final squad just before the deadline on 14 October, as more changes will require special ICC approval.

After completing his rehabilitation in London, explosive batter Fakhar Zaman, (who had been named in the reserves list) was promoted into the 15-player squad for replacing injured Usman Qadir.

The veteran left-hander Fakhar has 1,349 T20I career runs in 71 matches at a strike rate of 129.09. Fakhar was dropped from the squad because of poor form and injury, with an uncapped Shan Masood replacing him against England.

The experienced batter had managed 96 runs from six innings at the Asia Cup. But he is known for his ruthless hitting proficiency in limited-over cricket and he is lined up to play the highly-anticipated clash with India.

After the T20 Asia Cup and the home series disappointment, lots of queries were made about Pakistan’s middle-order strength and intent, but after the tri-series outcome, Pakistan’s batting line has got a boost and the skipper looks confident ahead of the mega event and believes that this middle order is on the right track. Babar remarked during the World Cup trophy unveiling ceremony: “the middle order has moved up in the last two matches (tri-series). When you get such performances right ahead of the World Cup, you earn a lot of belief as a team, and I think our middle order will perform well, and we are supporting them; the middle order is chipping in. And these are good signs for us before the T20 World Cup.”

The Pakistan team has a destructive bowling unit that will be challenging for other competitors in this T20 World Cup.

The skipper acknowledges the recovery Shaheen and the tri-series victory have boosted their confidence ahead of the T20 World Cup opening match against India.

Babar has welcomed back Shaheen, saying, “He is fully fit and dedicated and we are looking forward to winning the tournament. Pakistan has always produced good fast bowlers. Shaheen’s return has only strengthened our fast-bowling attack further.”

Haris Rauf is in a special form and his high-speed and slow ball variations are improving day by day, particularly in death overs. He also played a key role in the recently concluded series and changed many games in Pakistan’s favour. Haris is also known for the Australian conditions for his past Big Bash bowling experience.

Naseem Shah is one of the finest fast bowlers, who can challenge the fearless Indian batting.

On the other hand, Bumrah’s and Jadeja’s absence is a massive blow for the Indian side. Rohit will depend on a bowling attack with Bhuvneshwar Kumar and Mohammad Shami bringing in experience, but the track record of India’s death bowling remains concerning.

India leads Pakistan in the T20 World Cup appearance results. They have faced each other in 6 matches, India won 4 times, whereas Pakistan came out victorious on one occasion. One match ended in a tie, and that match ended with India’s victory. On record, Pakistan is five games behind against India, but the match on Sunday can go any way.

Key players to watch in the Pakistan side

Babar: Skipper Babar boasts 3,231 career T20I runs in 92 matches at a strike rate of 129.65. He is the backbone of the batting line. He has been remarkable consistency and has leadership abilities.

This time also, Babar is the centre of attention in the most significant encounter in the T20 World Cup. His last performance against these rivals was historic as he shared memorable innings with Rizwan.