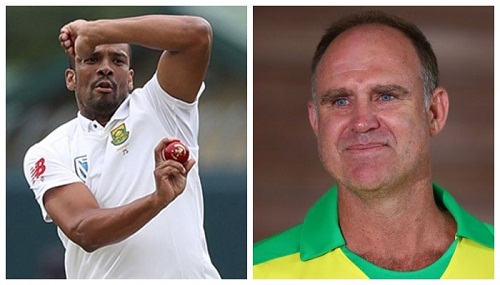 The announcement was made by newly elected PCB Chairman Ramiz Raja, who held a press conference yesterday to speak at length about changing Pakistan cricket’s mindset  and set it upon a new direction.

Cricket fans around the world remember Matthew Hayden as a tall, imposing Australian opener who was famous for walking down the pitch to smack pacers for boundaries at length.

However, here is a snapshot from ESPNCricinfo about Hayden and Philander’s careers in all forms of cricket:

“Strength was Matthew Hayden’s strength – both mental and physical. It enabled him to shrug off years of carping that he was technically too limited for Test cricket because of the way he played around his front pad, and it enabled him to touch rarefied heights of batsmanship,” says ESPNCricinfo about the Aussie.

His highest score in Test cricket is an impressive 380 runs.

In ODIs, Hayden played 161 matches and scored 6,133 runs at an average of 43.80 runs. He scored 10 centuries and made 36 half-centuries throughout his career.

Though Hayden has been appointed to coach Pakistan for the upcoming T20 World Cup, he didn’t play much of the format during his international career. With only nine T20 games under his belt, Hayden scored 308 runs and scored four half-centuries.

Vernon Philander, famous for being the second-fastest bowler to 50 Test wickets in history, was an asset for the Proteas while he played international cricket.

Vernon would move the ball at a sharp pace both ways and had the ability to attack the batsman’s stumps for long durations. Here is a look at his international career:

Philander picked up 220 Test wickets from 64 Test matches at an average of 22.31. His best bowling figures are 6/21 and he has taken a fifer 13 times in Test matches while notching up 10 wickets in a Test match only twice.

The all-rounder played only 30 ODIs and took only 41 wickets from them. His best bowling figures in the shorter format of the game are 4/12.

Like Hayden, he too has played very few T20Is. From seven matches, Philander could only take four wickets and gave away 114 runs.

From 64 Test matches, he scored only 1,779 runs, smashing only eight half-centuries.