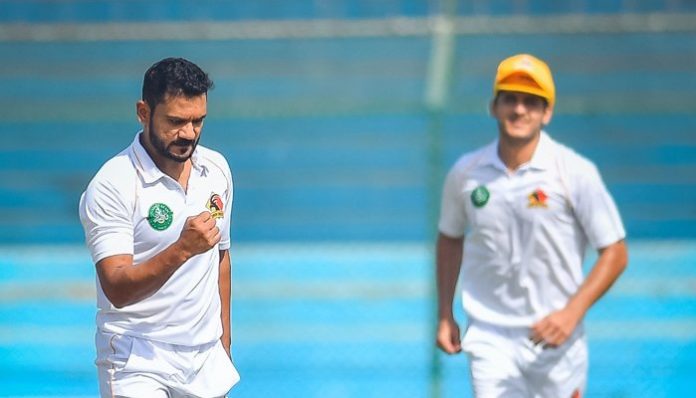 The 35-year-old is still waiting for his maiden call from selectors to wear Pakistan’s colours.

The long non-inclusion of Tabish Khan is surprising for many. There is no other fast bowler in Pakistan who has not played international cricket despite taking this much wickets in the first-class career.

The next most successful fast bowler in Pakistan without playing international cricket after Tabish was Sajid Shah who got 557 wickets to his credit between 1993 to 2011.

It was an emotional moment for Tabish at the National Stadium on Sunday as he burst into tears soon after taking his 5th wicket in the game.

“It was a very depressing moment for me. I was depressed for the last few months due to the death of my father and today I missed him the most,” Tabish told media after the first day’s play.

“He would always talk to me after my 5-fers, motivate me for never giving up. He desired to see me wearing Pakistan’s blazers,” he told media.

Tabish will turn 36 this December but for him age is just a number and he is not willing to give up the hopes of playing for Pakistan. And he now wants to do it for his late father.

“I spoke to my mother before this match and she also said that I’ll have to keep playing to achieve what father always wanted to. This is now the motivation for me. Cricket is in my blood and I will keep playing as long as my body is supporting me,” he said.

While many believe that at 36, there are very rare chances for Tabish to earn a call to play for Pakistan, some are of the view that if James Anderson can play at the age of 38, or Misbah – now the current head coach – can play till 42, then why can’t Tabish get a chance.

Veteran journalist Waheed Khan, on social media, said that age is just a number, and where there’s a will, there’s always a way.

“When we had Misbah playing till 42, Younis till 39, Shoaib Malik still playing at 39, Hafeez at 40 and James Anderson going strong at 38. (Then] age is just a number,” he tweeted on his page.

“To play for Pakistan is everyone’s dream. So is mine. I will keep chasing my dream. As a cricketer, it is my job to perform and do well in every opportunity I get and I will continue doing that,” he said.