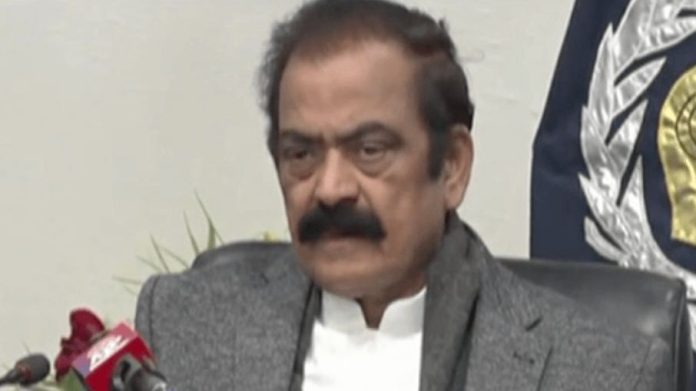 ISLAMABAD, JAN 05 (DNA) — Federal Interior Minister Rana Sanaullah on Thursday announced that it has been decided not to negotiate with any terrorist or terrorist organization and if there are negotiations, it will be with the Afghan government.

According to a private news channel, Interior Minister Rana Sanaullah held a press conference with Mufti Abdul Shakoor, Federal Minister for Religious Affairs and Inter-faith Harmony in Islamabad on Thursday.

Talking to the media persons, Rana Sanaullah said political stability is essential for economic stability so they will go in talks with the Afghan government if needed. He strongly criticized the political style of Imran Khan and said the Pakistan Tehreek-e-Insaf (PTI) Chairman is a fraud as he has not received any bullet in his body but pretended to get four shots.

Sanaullah said it is fact that the wound heals in two weeks if there is no fracture by the reason of the bullet. The interior minister confirmed that there is footage from every angle of the Wazirabad incident and he is assured that the accused Naveed did the attack himself and no one was behind him. He added that only one shot was fired from the container and it hit Muazzam.

Sanaullah said former Prime Minister Imran Khan sold the entire Toshakhana and now running an anti-national campaign about Pakistan’s default. He said the Punjab government is active in covering up the crimes of Farah Gogi and his followers. He added that property worth 7 to 8 billion rupees has been registered in the name of Farah Gogi.