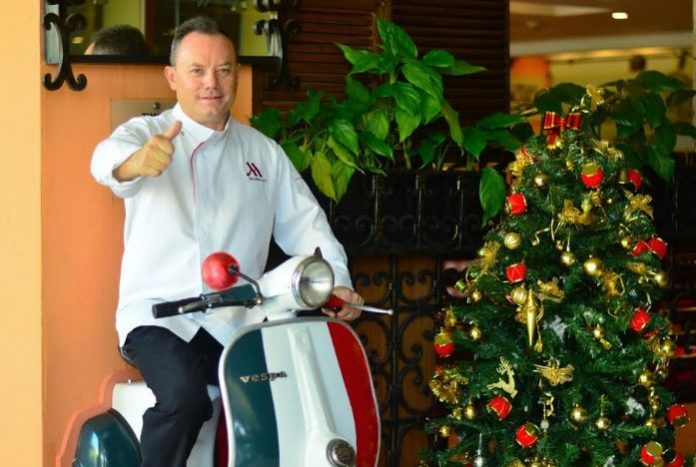 The denizens of this tensile town   for years have   been   served with a range of worn-out Italian cuisine variations on the same handful of dishes in the likes of   overcooked pastas, thick crusted pizzas, under- cooked  Ravioli’s and cream filled Italian desserts offered from  identikit menus  where the guests can also spot Chicken Karahi,   Chowmein and Cheese nans.

Zigolani, the Italian restaurant at Marriott hotel, Islamaabad is cut above the rest when it comes to bona fide Italian cuisine. The eatery’s legitimacy has further been baptized with the arrival of its new Italian chef Paolo Collavii.

Traveling around the world for last forty years, the new Executive Chef at Zigolani has arrived in Islamabad  and brings with him a  rich experience from the world of gastronomy as well as Italian culinary heritage and traditions. From Morocco to Greece, Kuwait to Singapore, Turkey to South Korea , Chef Collavii have been around,  being part of the many pre-openings  of bistros,  cafes and restaurants in five star hotels, running kitchens  in small  as well as many metropolitan cities  . However the first job of his career was as a trainee Chef at a cruise ship kitchen where he worked behind the burners for 5 years while in his teens.

The menu at Zigolini   offers a wide range of small starters, perfect for sharing, including a melt –in-the savories,  moving on to the    more solid affair with a selection from the main course in the likes of fish, lamb, beef and sea food  dishes, either accompanied by Pasta’ and  Ravioli’s or stand alone . However the flagship item at any Italian restaurant is “Pizza” and the Wooden –oven, handmade pizza prepared by the chef, is not only a treat for the taste buds but for the eyes as well. Garlic, mozzarella cheese and a few herbs of one’s liking is what one can find at any Italian restaurant in Italy and now in Islamabad.

In a drive to make Zigolani, a paragon of purism, the new chef wants to offer an Italian menu that is veritable and powerfully evocative of each of the   regions landscape picked up from across the length and breadth of Italy so that the culinary regionalism burns fiercely and is quintessential. The Risotto from the north, the ripe tomatoes from the south regions and the seafood treasure trove from the Arctic and Mediterranean seas

Due to the SOP’s issued by the Government of Pakistan and the administration of Islamabad, Marriott hotel has creatively laid down dining tables in the big spacious driveway in open air to facilitate their regular visitors. The guest once seated can order from the menu’s laid down on the tables from  their Chinese restaurant, Dynasty, Royal Elephant, the Thai eatery, Dumpukht, the Pakistani restaurant and Zigolani.

As my temptation was to try the new chef’s menu, the choice was obvious. The food began  to arrive in a steady stream. Served as per the order close to the typical Italian culinary tradition, well structured antipasti arrived at the table with the cheese and charcuterie board which went with the saying that “you eat with your eyes”.  It was clear that an experienced hand is at work, it really did make a case in point.

Simple and delicious, the main course was accompanied by seafood, chicken, eggplant and beef dishes married to Pastas, Raviolis and risottos. Tagliata di manzo was the beef dish and is one of Italy’s most popular meat savories.  It’s a boneless piece of grilled beef, served in slices. Tagliare, means “to cut”. To make the beef Tagilita, all you need is high quality cut of beef and some herbs, balsamic vinegar reduction and rustic potatoes bursting out of their skins as explained by the chef. It is one of the most popular ways to serve it is alongside peppery arugula salad, with thinly shaved Parmigianino Reggiano and a drizzle of extra virgin olive oil and balsamic vinegar, the chef further elaborated  as I started to do justice to the dish.  The beef texture was indeed strident and the   aromatic taste of olive oil and balsamic vinegar doing a tango with green herbs, just took it to the next level.

Peeking up from a deep puddle of soup was what chef introduced as Zuppa de pesce allo zafferano. “Usually it is served in a soup bowl, but I prefer a deep dish to make more space for the soup. The broth is made from the fish whereas red snapper, squids and prawns was a party of three making their presence felt.  I also used Saffron because in Pakistan, the quality is very good and it’s not expensive as well”. He informed. On the side there were two pieces of crusty bread brushed with dry garlic rubbed before being roasted.  The soup was simply mouth watering. The amalgamation of three seafood delicacies, swimming with vinegar and olive oil, It was a master class in brothery and it   will slap you awake with the tinge and acidity.

The mastery   of traditional way of cooking food depends upon how deep one has gone  into the culture and tradition of its roots and with  arrival of every dish, its texture, taste and above all, the presentation , it leaves no doubt in one’s mind that   chef Paolo Collavii  knows what food, culture and tradition is all about . He knows and loves the Roman repertoire and wants to give it, the love it deserves.

It was worth sticking around for dessert as the chef has already warned to keep some room.  In comes the Tiramisu on white platter, dusted with cocoa powder. It was hands down a mouth burst, served with its silkiness. Texturally, aligned, pregnant with mascarpone cheese, releasing its ballast of sweet syrup as you spoon it, was a star turn.