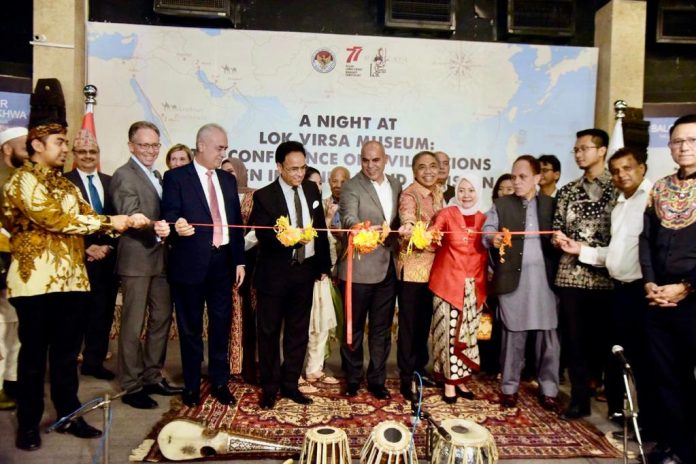 “A Night at Lok Virsa Museum”

ISLAMABAD: The Embassy of the Republic of Indonesian and Lok Virsa organized a 4 – day photo exhibition titled “A Night at Lok Virsa museum: The Confluence of Civilization between Indonesia and Pakistan” starting from 21st– 24thJuly 2022 at Lok Virsa Museum. The exhibition is a humble attempt to connect the dots of ancient civilization, including art form, sculptures, architecture, and the spread of various religions in the archipelago through the Indian sub-continent.

“A Night at Lok Virsa Museum”, aims to highlight fresh perspectives into historical connections, religious backgrounds, and to strengthen the cultural ties between the two Muslim brotherly countries.

The inaugural ceremony was attended by the Diplomatic corps, business community, government officials, prominent media personalities, and the Indonesian Diaspora.

The Indonesian Ambassador Mr. Adam Tugio said, “Indonesia and Pakistan are home to one of the oldest civilizations in the world.”

Pakistan and Indonesia are blessed with rich cultural heritage and traditions carrying interesting and attractive similarities which play an important role in keeping the brother ties stronger. ”He added.

The Executive Director of Lok Virsa, Mr. Sajjad Ahmad said, “We hope this joint effort on the part of Lok Virsa and The Indonesian Embassy would go a long way in promoting and strengthening the existing cultural relation between Indonesia and Pakistan.”

Visitors were captivated by the photo exhibition, Indonesia Batik and Ajrak stall, which displayed a diverse range of vibrant and traditional products.The live batik making and Ajrak stamping drew a large crowd, and the talent and creativity of the artistswerehighly appreciated.

Moreover, the event was followed by an Indonesian dinner hosted by the Embassy of the Republic of Indonesia. The guests were served with a variety of Indonesian delicacies such as Sattay ayyam, nasi goreng, fried noodles, martabak, layer cake and many more dishes.