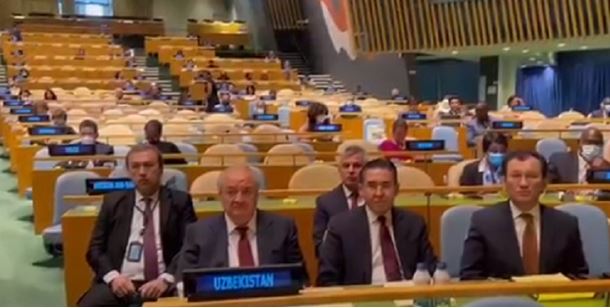 On July 11, 2022, the UN General Assembly approved a special resolution on strengthening the connectivity between Central and South Asia.

The document was presented by Abdulaziz Kamilov, the special representative of the President of Uzbekistan on foreign policy matters, who is visiting New York.

The initiative to develop this resolution and strengthen the common approaches, main principles and directions of the dialogue between the two regions was put forward during the Tashkent conference on the topic “Central and South Asia: regional interdependence. Threats and opportunities” held by the head of our state in July 2021.

In his speech at the conference, the head of state emphasized the importance of strengthening dialogue based on the historical closeness of the Central and South Asian regions, mutual trust and consideration of interests.

About 600 representatives from 50 countries of the world, including heads of state and government, foreign ministers, heads of international and regional organizations took part in the Tashkent conference. In his video address to the participants, UN Secretary General António Guterres emphasized that “interconnection plays an important role in trade, economic growth and sustainable development” and “can contribute to the establishment of long-term peace, stability and prosperity in Central and South Asia”.

In the resolution, strengthening cooperation on the implementation of the Vienna Declaration and its action program for landlocked developing countries for 2014-2024, as well as the importance of transport and transit corridors for accelerating economic growth and increasing the efficiency of economic relations between Central and South Asian countries and their unique the importance of realization of transport, transit and investment potential has been noted.

The document recognized the important role of regional organizations in strengthening regional relations, the role of Afghanistan in establishing relations between Central and South Asia, as well as the importance of its integration into interregional economic processes for its economic development and ensuring lasting peace and stability.