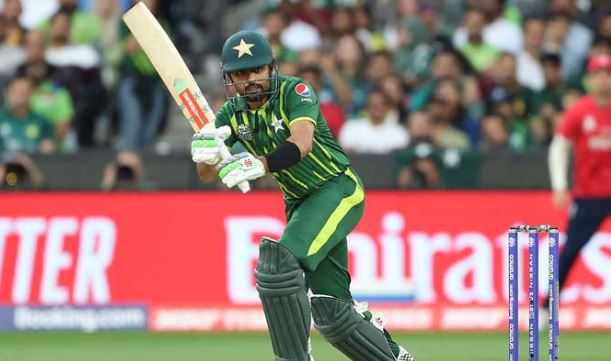 LONDON: A cricket brand, Gray-Nicolls, has unveiled the “insane-looking” bat especially made for Pakistan skipper Babar Azam — which he will be using to play for the national team soon.

The sports manufacturing company, taking to Twitter, on Friday shared a short video of the bat they have made for Babar.

“This new bat for Babar is looking insane,” the brand wrote in its caption revealing the bat designed for the 28-year-old batter. In one of its pinned posts on Instagram, Babar can be seen holding his bat alongside Mohammad Rizwan and Shan Masood.

Under the Pakistan skipper’s leadership, Green Shirts qualified for the final of the recently-concluded T20 World Cup in Australia. But, they ended up on the losing side with England taking the trophy home.

The right-hander didn’t have a good start to the tournament as he scored just 39 runs in the Super 12 stage of the event, which caused fans and several pundits to criticise him for his dismal performance.

However, he delivered for his side during the semi-final against New Zealand at the Sydney Cricket Ground. The right-hand batter scored 53 runs off 42 balls in pursuit of the 152 runs set by the Kiwis to help the green shirts reach the final of the mega event.

After the decent innings against the Black Caps, the Pakistan skipper failed to deliver in the grand finale against England as he was sent back to the pavilion by Adil Rashid after scoring 32 runs off 28 balls.

It must be noted that Gray-Nicolls announced the signing of Babar to their international player roster in December 2020.

Commenting on his signing, Richard Gray, Sales and Marketing Director for Gray-Nicolls, said: “We are delighted to welcome Babar to Gray-Nicolls and excited to have one of the best players in the world use the brand. We’re looking forward to seeing his continued success up close.”

Apart from Babar, Gray-Nicolls’ current brand ambassadors include the likes of Sir Alastair Cook and Kane Williamson as well.