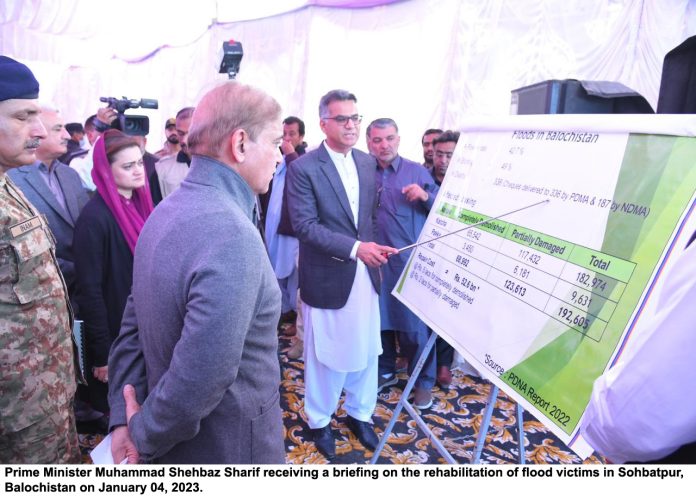 Prime Minister Shehbaz Sharif vowed on Wednesday to highlight the plight of flood affectees across the country at the upcoming Geneva conference, saying that thousands of flood-hit people were still waiting for help.

The International Conference on Climate Resilient Pakistan will be held in Geneva on January 9. The event will be co-hosted by the Government of Pakistan and the United Nations.

It aims to bring together government representatives, leaders from the public and private sectors and civil society to support the people and the government after the devastating floods of 2022.

The premier, who arrived in Balochistan’s Sohbatpur district earlier today to review rehabilitation efforts, said that he had contacted leaders of all friendly countries and invited them to attend the conference.

“The floods that hit Pakistan this year […] I have never this much damage in my life. The last time I came to Sohbatpur, the entire district was inundated and even transporting medicines and food here was a challenge.

“It was a test for the government […] but with the help of the National Disaster Management Authority (NDMA), we were able to distribute Rs100 billion among the affectees,” PM Shehbaz recalled.

However, he said, there is still a lot more left to do.

“There are thousands of people under the open sky in the mountains of Khyber Pakhtunkhwa and the plains of Sindh […] they are waiting for help.”

The prime minister said that at the Geneva conference, he would discuss the remaining challenges faced by Pakistan along with United Nations General Secretary Antonio Guterres.

“And I am hopeful that civilised societies will play their part here. Our resolve is absolute and we won’t rest even for a minute,” he promised.