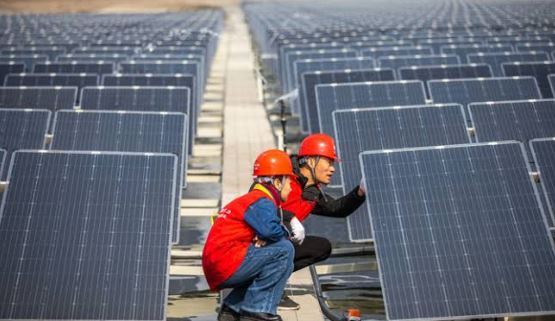 It says, the rapidly changing nature of socio-economic partnerships, conflicting realities of geopolitics and complex & compelling geostrategic scenarios has forced all the countries to take concrete policy measures to mitigate spillover repercussions of energy security and Pakistan is not any exception.

Moreover, the increasing threat of non-state actor of climate change has produced devastating ripples in the world due to which even the basic human survival and pace of productive channels are under tremendous pressure.

In this connection, ongoing heat-waves and wild spread fires in the European Union and the US, reducing agro-production in South East Asia, abnormal rise in global warming in Africa and last but not the least, record high green gas emissions in Latin America have encouraged countries, communities and organizations to shift from fossil fuels to clean and green energies.

Therefore, the government of Pakistan must seek assistance to overcome the energy deficit from China, as the country is one of the biggest promoters and investors of clean energy, especially solar and wind in the world.

Four of the world’s five biggest renewable energy contracts were signed by Chinese private companies in 2016. The country built nearly 31 gigawatts (GW) of new solar power capacity from January to June, up 137 percent from a year earlier, with full-year installations on course to hit a record high.

The International Energy Agency said that China’s holistic and comprehensive policies and innovation have made solar power more affordable. China has been instrumental in bringing down costs worldwide for solar photovoltaics (PV), with multiple benefits for clean energy transitions. Thus, the government of Pakistan and its private sector should take this golden opportunity to further strengthen the solar energy cooperation with China.

Moreover, China plans to build mega wind and solar power projects to achieve the target of lesser carbonization and carbon neutrality. Critical analysis reveals that China is set to add at least 570 gigawatts (GW) of wind and solar power in the 14th five year plan (FYP) period from 2021 to 2025.

It is estimated that China’s other plans for clean energy expansion, the new wind and solar power may be enough to enable China to peak its fossil fuel consumption and CO2 emissions before 2025. It seems that diversified expertise of the Chinese companies in solar energy installation and production opens a new window of opportunity for the government of Pakistan to further enhance energy mix and production alike in the country.

Furthermore, China plans to speed up the construction of the second batch of massive wind and solar power projects in the Gobi Desert and other arid regions, which may also be replicated in the deserts areas of Pakistan.

The latest published report from the Pakistan’s board of investment, out of the $144 million foreign investment in Solar PV plants, $125 million is from China, accounting for nearly 87 percent of the total.

Among the 530MW cumulative generation capacity in Pakistan, 400 MW (75 percent) is generated from Quaid-e-Azam Solar Park, the first ever power plant capable of generating solar energy in Pakistan, owned by the Punjab government and built by China’s Tebian Electric Apparatus Xinjiang New Energy Co. With 400,000 solar panels spreading over 200 hectares of flat desert, the plant was initially launched with a capacity of generating 100 MW of power for Pakistan.

Moreover, there has been the addition of 300 MW power generation capacities with 3 new projects in Pakistan, and there are numerous planned projects reported for the Quaid-e-Azam Solar Park with a cumulative capacity of 1,050 MW in the country which should be started as soon as possible and the best solution for its early execution is to seek help from Chinese companies. Thus, enhanced solar energy cooperation should be mantra of the incumbent government in the country.

Chinese companies are also the major suppliers to many PV Projects in Pakistan such as Mini Solar grids in KP and ADB Access to Clean Energy Program,this means that Chinese companies have been supporting the Pakistani government and its private sector in the solar energy installation and production.

Pakistan Solar Energy Market is expected to record a Compound Annual Growth Rate (CAGR) of 2.5 percent from 2022 to 2027. Unfortunately, the Average Utilization Rate (AUR) of the operational Solar PV plants is approximately 19 percent far from the over 95 percent utilization rate in China, representing huge opportunities to be tapped. Therefore, both countries should extend their cooperation in solar energy production as soon as possible.

In Pakistan, the inadequacy of power always leads to surging electricity tariffs and foreign exchange expenditure on imported energy is aggravating the necessity for the country to be more independent in power generation. Thus, solar energy cooperation between China and Pakistan is a must.

Currently, thermal power is still the main producer of electricity in Pakistan, accounting for 59 percent of the total installed capacity. Imported fuel has put a heavy burden on our treasury.

Solar PV is significantly cost-effective when compared to imported energy, LNG, and gas. According to World Bank, Pakistan requires only 0.071 percent of its total land area, mainly in Baluchistan and interior Sindh, to achieve the benefits of solar power.

It is estimated that complete transformation of the energy sector shifting from fossil fuel to clean energy, mainly solar, will achieve miracles in the country. In this regard, the Chinese companies have already shown keen interest to support Pakistan and its people alike for initiating robust growth trend of Pakistan’s solar consumption.