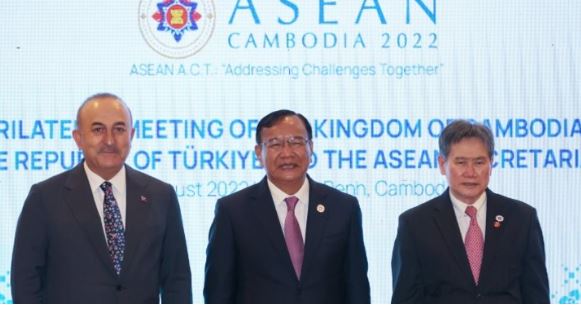 Emphasizing that Asia has become the “power center” of the global economy, the foreign minister of Türkiye said on Wednesday that it was the “Asia Again” era.

In his high-level talks on the sidelines of the event, the Turkish official said he had discussed bilateral ties, as well as developments in Taiwan and Ukraine with his Chinese counterpart.

“In addition to all these, we conveyed our sensitivity about the Uyghur Turks to them (Chinese side). They told us that a delegation from Türkiye could be sent to the region following a seven-day quarantine, meaning they wanted them (delegation) to come to the region,” Çavuşoğlu said,

He added that a visit to the Uyghur Autonomous Region in Xinjiang by Türkiye’s ambassador to China was “also on the agenda without any restrictions in the upcoming period.”

The northwestern province of Xinjiang is home to ethnic Uyghurs, mostly Muslims.

China has been accused of ethnic cleansing of Uyghurs in the autonomous region. Beijing has denied any wrongdoing, calling the allegations “lies.”

On his meeting with his Russian counterpart, Çavuşoğlu said they had addressed a recent deal for the export of Ukrainian grain.

“We evaluated whether the agreement reached on grain could lead to a cease-fire and a lasting peace,” he said, while adding that they also discussed preparations ahead of Turkish President Recep Tayyip Erdogan’s visit to Sochi on Friday.

Türkiye, the UN, Russia, and Ukraine signed the landmark deal on July 22 to reopen three Ukrainian ports — Odesa, Chernomorsk, and Yuzhny — for grain that has been stuck for months due to the ongoing Russia-Ukraine war, which is now in its sixth month.

To oversee Ukrainian grain exports, a joint coordination center in Istanbul was officially launched on July 27, comprising representatives from Türkiye, the UN, Russia, and Ukraine to enable the safe transportation by merchant ships of commercial foodstuffs and fertilizers from the three key Ukrainian Black Sea ports.

Noting that his counterparts that he has met in Cambodia expressed their thanks to Türkiye for its role with the UN on the grain deal, Çavuşoğlu said they also voiced their trust in Ankara.

“It is evident that the hope for Türkiye is indeed increasing. Türkiye has become a global actor. We will continue to make efforts for the peace and tranquility of both our region and the world in a constructive way,” the Turkish foreign minister added.

Çavuşoğlu also announced an upcoming visit to Malaysia upon an invitation of his counterpart from that country, Saifuddin Abdullah.

Noting plans to discuss preparations ahead of Malaysian King Al-Sultan Abdullah Ri’ayatuddin Al-Mustafa Billah Shah’s visit to Türkiye in the near future, Çavuşoğlu is to be received by Ismail Sabri Yaakob, the Southeast Asian nation’s prime minister.