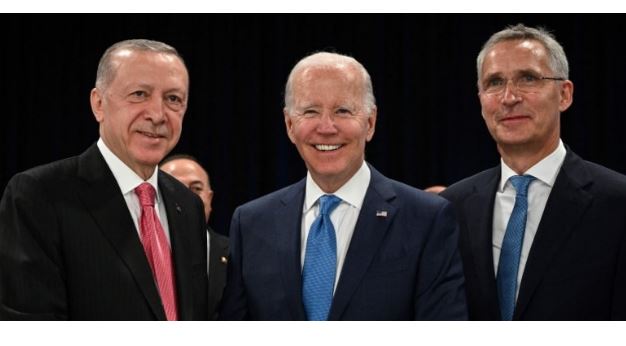 The Turkish media lauded a deal to allow Finland and Sweden to join NATO as a triumph for President Recep Tayyip Erdoğan, saying on Wednesday he had wrested concrete gains from the West in the country’s fight against terrorism.

The 11th-hour agreement on Tuesday, which caught many by surprise, lifted Ankara’s veto over the Nordic states’ membership bids. It ended a weeks-long dispute that tested the defence alliance’s unity against Russia’s invasion of Ukraine ahead of this week’s NATO summit in Madrid.

“President Erdoğan’s Madrid Victory,” said a Sabah newspaper headline, above a photo of him standing next to NATO Secretary-General Jens Stoltenberg at the centre of a group photo after the accord was signed.

“Erdogan’s decisiveness and leadership vision won acceptance for all of Turkey‘s arguments in the fight against terrorism,” the paper said.

The Turkish media outlets echoed a note circulated by Erdoğan’s office before the memorandum was released in Madrid.

The Akşam newspaper listed the elements of the agreement noting it would establish a monitoring mechanism sought by Ankara. “Nine guarantees for Turkey,” it said.

The two Nordic nations pledged not to support groups which Ankara deems terrorists and committed to prevent activities of the bloody-minded PKK terrorist group and its affiliates.

Notably, the statement said Finland and Sweden would not support the YPG militia, which Ankara says is such an affiliate.

Turkey’s Western allies designate the PKK as a terrorist group.

The PKK launched an armed campaign against the Turkish state in 1984. More than 40,000 people have been killed by terror attacks carried out by the PKK terrorists so far.

The agreement also said Finland and Sweden would address Turkish extradition requests for suspected militants thoroughly and they would both lift restrictions on selling weapons to Turkey.

“Turkey got what it wanted at the table,” said Milliyet newspaper, adding PKK suspects would be extradited to Turkey.