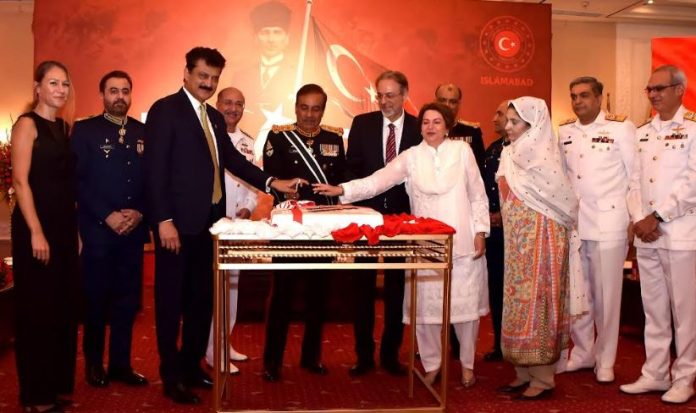 100th Anniversary of the Victory Day of the Republic of Turkiye; CJCSC General Nadeem Raza attends as chief guest

ISLAMABAD: Pakistan, on Tuesday reaffirmed its solidarity and unflinching support for the brother people and government of Turkiye on the occasion of the 100th Anniversary of the Victory Day of the Republic of Turkiye.

On the special occasion of this Victory Day of the Republic of Turkiye (30 August Zafer Bayrami), the Government and the people of Pakistan reaffirm their abiding solidarity and unflinching support for the brotherly people and the government of Turkiye.

This day, a hundred years ago, the great Turkish nation secured the ultimate victory by defeating foreign occupation and imperialism. Unyielding determination, courage and unity exhibited by the Turkish nation laid the foundation of Turkiye’s liberation, independence and national sovereignty.

The Ministry of Foreign Affairs in a statement said that on this occasion, Pakistan pays special tribute to the great Mustafa Kemal Ataturk who inspired and led his compatriots to one of the most brilliant victories in the world history.

In their heroic struggle against the foreign occupation through the war of Independence, the valiant Turkish nation was wholeheartedly supported by the Muslims of South Asia, the MOFA further said.

Ambassador Pacai in his speech welcomed the guests and talked about the history of the Victory Day. The ambassador read out the message of the President of Turkiye Recep Tayyip Erdogan.

The Turkish President congratulated all Turkish citizens living across the world including the people of Turkish Republic of Northern Cyprus on the Victory Day.