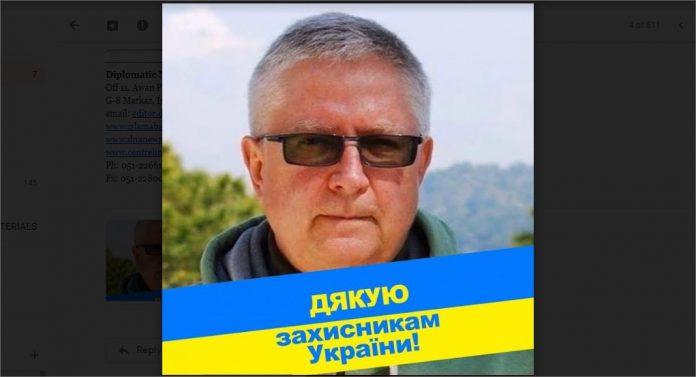 Ambassador Volodymyr during his tenure contributed greatly towards promotion of bilateral relations.

Ambassador Volodymyr is the fourth ambassador leaving in the month of July. Ambassadors of Hungary, Sweden and Nigeria have already packed up their wherewithal to say goodbye to Pakistan.

Ambassador of Ukraine happens to be the longest serving ambassador among all those who are leaving this month. In the seniority list he was number two after the Bahrain ambassador.

Ambassador Volodymyr during his tenure contributed greatly towards promotion of bilateral relations. During his eventful tenure he hosted a number of jam-packed national day receptions in which Ambassadors of USA AND UK made rare presence. Normally both of them do not attend such functions.

Apart from these functions ambassador Volodymyr hosted many events at his embassy including interactions with the media people. Besides, he hosted the Ukraine Diaspora also at the embassy in order to listen to their issues.

Ambassador Volodymyr, a down to earth and humble personality, devoted much of his time in promoting the cause of his country and strengthening bilateral relations. He had a chance of becoming Dean of the Diplomatic Corps being the senior most ambassador, however he politely declined the offer for he wanted to focus much on his professional job.