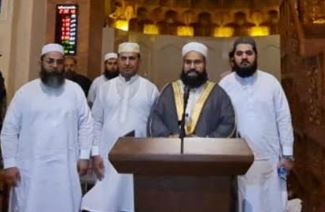 LAHORE, JUN 3 /DNA/ – Ulemas-Mashaykh have urged on pilgrims visiting Saudi Arabia for Hajj to fully abide by the code of conduct issued by the government of Saudi Arabia, and to stay away from any kind of political and sectarian sloganeering and negative activities in the Kingdom of Saudi Arabia.

Addressing with Hajj Conference, the Ulemas-Mashaykh said that the government of Pakistan should provide subsidy to the poor and middle class adding that subsidy on ‘Nafli Hajj’ for affluent sections of the society should end.

The Code of Conduct for Pilgrims of Hajj and Umrah issued at the conference states that Hajj is an mandatory act of worship which is dutified on those who can afford it.

During the last two years, Saudi government has not allowed pilgrims from out of the Kingdom of Saudi Arabia on account of Coronavirus limits.

The government of Saudi Arabia has made arrangements for the Hajj for one million pilgrims this year, which is commendable, said Ulemas-Mashaykh addressing with Hajj Conference.

Violation of laws can create problems not only for this person or group but also for other pilgrims and Pakistan.

Hajj is a symbol of the greatness, unity and glory of the Muslims. Therefore, the pilgrims of Hajj should not violate rules and laws of the government of Pakistan and the Kingdom of Saudi Arabia during Hajj days.

Every ruler of the Kingdom of Saudi Arabia has tried his best to provide facilities to the pilgrims.

Khadim-e-Harmain Al-Sharifain and his Crown Prince and the rest of his government staff remained committed to provide facilities for the pilgrims.

During the Hajj days, do not try to establish a political arena in Saudi Arabia and especially in Mecca, Madinah, Mina and Arafat and do not be a part of any such effort.

The purpose of all these forces is only to destroy the peace and sanctity of Harmain Al-Sharifain and to create difficulties for the pilgrims.

One shouldstay away from all such individuals, groups, and elements who do this and if you come across any such thing, be sure to inform your group leader and do not pay attention to rumors.

In the same way, some groups and individuals come to the buildings of the pilgrims and tell them about the issues of Hajj which they would not have been told by their respective scholars and Ulemas-Mashayk.

In case of such situation, instead of arguing with these individuals, try to stay away from such persons and elements and let them know that we have been guided by our scholars, so do not try to make us aware of your teachings.

Meanwhile in Mina, Arafat, and Muzdalifah clearly follow the instructions of your group leader on their way in and out.  Do not be in any hurry and haste because if there is an accident as a result of haste then who will be responsible for it?

Similarly, in the case of Rami Jamrat, follow the instructions of the scholars and group leader in the caravan and do not demonstrate any haste.

On the issue of Rami Jamrat, keep in mind the instructions and facilities mentioned by one’s guide and Mufti-e-Azam in the light of Islamic law for women, the sick and the weak, and when Allah Almighty has provided facilities for you, then take advantage of these facilities and do not create problems for oneslef and others.

Hafiz Muhammad Tahir Mehmood Ashrafi also said that Hajj conferences, seminars and training sessions are being organized across the country in collaboration with the Pakistan Ulema Council and the International Tazeem-e-Harmain Al-Sharifain Council for intending pilgrims from Pakistan.