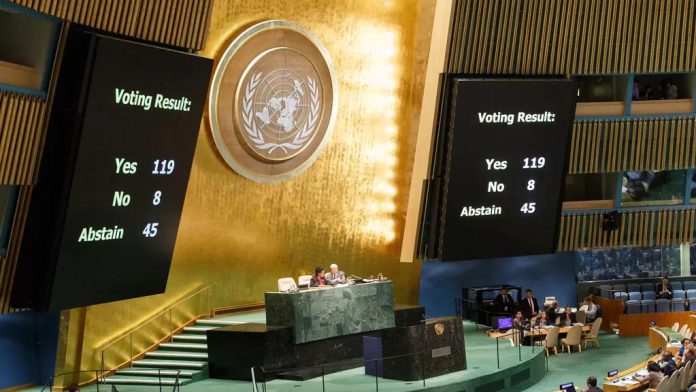 Acting without a vote, the 193-member Assembly recommended that all states in the region and all other regions cooperate in preserving peace in the Central Asian zone and respect the national unity, sovereignty, political independence and territorial integrity of all states of the region, in strict observance of the Charter of the United Nations.

Introducing the resolution, Turkmenistan Ambassador Aksoltan Ataeva, on behalf of Kazakhstan, Kyrgyzstan, Tajikistan and Uzbekistan, said that the time has come to articulate and declare clearly the principles and norms that will contribute, based on the legitimate interests of Central Asian countries, to peace and security, sustainable development in that region, cooperation and the cultural relations of their people.

The countries of the region have great potential for cooperation and development, she said, adding that they share a common spiritual, cultural and historical heritage. They also share transport and communication networks and economies that complement each other.

Pakistan UN Ambassador Munir Akram said the resolution’s aims to strengthen international peace and security, promote the purposes and principles of the United Nations Charter, advance multilateralism and enhance mutual understanding and cooperation — are essential building blocks for economic development, regional peace, prosperity and connectivity in Central Asia and beyond.

“Pakistan fully supports this timely resolution and its objectives,” he said.

Pakistan is committed to building connectivity and cooperation in trade, investment, transport, energy and other sectors with its Central Asian neighbours, Ambassador Akram said.

Noting that the world has witnessed frequent resort to unilateral force and external intervention over the past few decades, the Pakistani envoy said foreign occupation persists in several regions, with  conflicts, among and within nations, proliferating.

“Ideologies of hate-Islamophobia, anti-Semitism, fascism – have re-emerged. And, a new and destabilizing global arms race is underway,” he said.

“In this challenging global environment,” Ambassador Akram said, “It is essential to revive respect for the principles of the UN Charter; to actively promote the peaceful resolution of conflicts and international cooperation; and to overcome global challenges of development and climate change.”

Pointing out that Central Asia connects the East with the West and the North with the South, the Pakistani envoy said peace and stability in this region is vital for achievement of stability, cooperation and trade.

For sustainable peace in the region, durable peace and security in Afghanistan must be ensured, he added, calling for sustained engagement with that country’s government by all its six immediate neighbours.