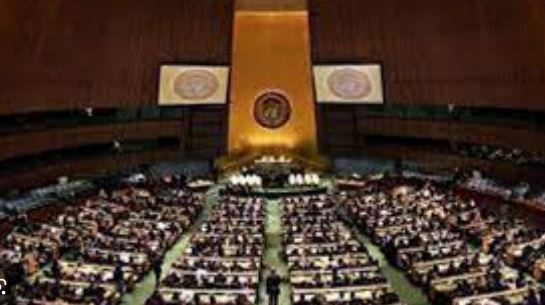 UNITED NATIONS, NOV 22 (DNA) — The United Nations General Assembly Monday adopted by consensus a resolution, introduced by Pakistan, on cooperation with the Organization of Islamic Cooperation (OIC), urging the UN system to enhance collaboration with the Jeddah-based body in areas of mutual interest.

Under the terms of the resolution, “Cooperation between the United Nations and the Organization of Islamic Cooperation”, the 193-member Assembly affirmed that the UN and OIC shared a common goal of promoting and facilitating the Middle East peace process with the goal to establish a just and comprehensive peace in the region.

It also affirmed that it shared a common objective of fostering peaceful and political solutions to other conflicts in accordance with the Charter of the United Nations and Security Council resolutions.

Introducing the resolution in the 193-member Assembly, Ambassador Munir Akram, speaking in Pakistan’s capacity as chair of the OIC member states group in New York, said it highlights the two organizations’ desire to work together on shared concerns, including global security, self-determination, respect for territorial integrity, decolonization, and combating terrorism.

The Pakistani envoy said the draft is consistent with the spirit of the resolution which, in 1965, invited the Islamic Organization to participate in the work of the United Nations and its subsidiary organs as an observer.

“This year’s resolution”, he told the General Assembly, contains technical changes, and invites all member states to observe the International Day to Combat Islamophobia in an appropriate manner.

In its operative paragraphs, the draft recognizes the continuing cooperation between the Islamic Organization and United Nations entities, including the Office of the United Nations High Commissioner for Refugees (UNHCR) and the United Nations Entity for Gender Equality and the Empowerment of Women (UN?Women).

Cooperation between the two has never been more important than in these challenging times, Ambassador Akram said. Addressing complex challenges together brings countries and international organizations together.

Ambassador Akram thanked UN Secretary-General Antonio Guterres for his constant engagement with OIC and its members, recognizing annual tradition of visiting Muslim communities during the holy month of Ramadan to demonstrate solidarity and exchange views on pressing issues.