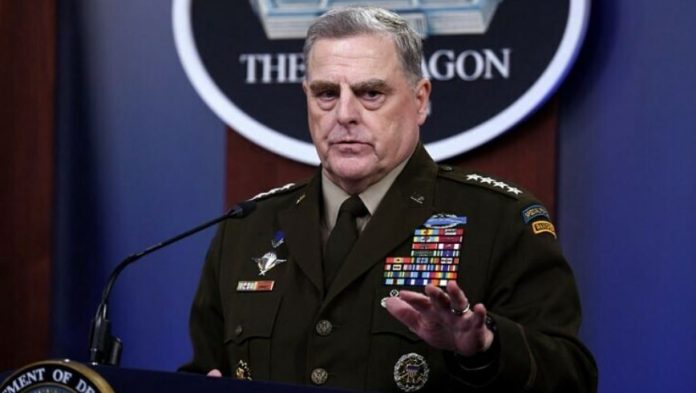 WASHINGTON: The US is pressuring Ukraine to be open to peace talks with Moscow, with a top Pentagon official saying Kyiv’s forces will find it hard to recover all the territory Russia has captured in the war.

US Joint Chiefs Chairman General Mark Milley said on Wednesday that US and allied support has not diminished, but added that Kyiv’s success in countering Russia’s invasion puts it in a better position to begin talks.

And last week Milley compared the current situation to World War I when the two sides ground to a stalemate within months but kept fighting for three more years at the cost of millions of lives.

He said on Wednesday that the Russians were now reinforcing their hold on about 20 per cent of Ukraine’s territory and that the front lines from Kharkiv down to Kherson were stabilising.

“The probability of a Ukrainian military victory, defined as kicking the Russians out of all of Ukraine, to include … Crimea, the probability of that happening anytime soon is not high, militarily,” he said.

“There may be a political solution where, politically, the Russians withdraw, that’s possible,” Milley added.

“You want to negotiate from a position of strength. Russia right now is on its back,” he said.

White House national security spokesman John Kirby insisted on Thursday that the United States is not trying to force Kyiv to hold talks or cede territory.

Only Ukrainian President Volodymyr Zelensky “gets to determine if and when he’s ready for negotiations and what those negotiations look like”, Kirby told reporters.

“Nobody from the United States is pushing, prodding or nudging him to the table.”

But earlier this month Zelensky dropped his precondition that Russian President Vladimir Putin had to be out of power before he agreed to talks — a shift, the Kyiv Post reported, that came after White House pressure.

And on Monday, CIA Director William Burns held talks with Russian SVR intelligence chief Sergei Naryshkin in Ankara, the highest-level in-person meeting of US and Russian officials since the war began in February.

The details of their meeting remain secret, but Burns flew to Kyiv to meet with Zelensky immediately afterwards.

Burns “is not conducting negotiations of any kind … We firmly stick to our fundamental principle: nothing about Ukraine without Ukraine”, the White House insisted.

US support for Ukraine remains strong. This week the White House asked Congress for another $38 billion to support Kyiv.

But it has not contradicted Milley’s view, either. Milley said in New York last week that Ukraine has lost nearly 100,000 in dead and wounded on the battlefield — close to Russia’s estimated losses — and some 40,000 civilian casualties.

The number could multiply if Kyiv insisted on trying to fight all the way to its pre-2014 borders, he suggested.

One million people were killed over August-December 1914, the first months of World War I, after which the front lines were cemented into place.

Yet neither side would negotiate, he said, and that “turned into 20m killed by 1918”. “So when there’s an opportunity to negotiate when peace can be achieved, seize it,” he said.

Milley’s comments raised fears that the United States wanted to prune back Kyiv’s goal of recapturing all the land Russians occupy, including Crimea and the Donbas, which it lost control of in 2014.

“Any voiced ideas of our land’s concessions or of our sovereignty cannot be called peace. Immoral compromises will lead to new blood,” Zelensky told the Halifax International Security Forum on Friday.

Georgetown University Professor Charles Kupchan said the Biden administration is more likely just trying to make sure the door is open for talks, and that Milley is simply “a bit more forward-leaning”.

“I don’t think it’s premature. I think it’s prudent. The Russians and the Ukrainians need to have a perspective that there is a diplomatic route,” he said.

And it is also a signal to Zelensky, whose stridency is testing some allies’ patience.

“Zelensky, understandably, gets a little heated, and says things that allies might not relish,” said Kupchan.

Kupchan added that the White House is seeking to get ahead of any pressure from European allies to end the war before Kyiv is ready.

“The Biden administration wants to move slowly, in order to make sure that the transatlantic consensus remains rock-solid.”

But defence strategy expert Frederick Kagan of the American Enterprise Institute said that Milley doesn’t reflect all of Washington.

Rather than pressuring Zelensky, the US should increase arms supplies to help Ukraine soundly defeat the Russian forces, he said.

“I am not persuaded that the Ukrainians can’t retake all or most of their territory,” he said.

“We should help accelerate the Ukrainian victory in this war,” he added.

“Slowing down now is not the right thing to do. “