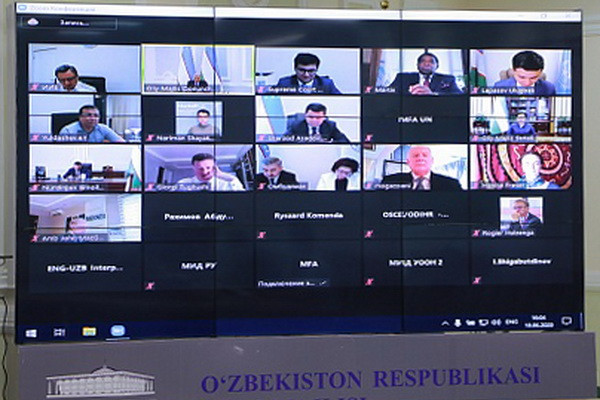 Tashkent, DNA — On 10 June 2020, the Legislative Chamber of the Oliy Majlis hosted an international parliamentary forum in the form of a video conference on the theme “The role of parliaments in implementing the recommendations of the UN charter and treaty bodies: the United Nations Human Rights Council and the Committee on human rights.”

The event for the first time in the history of Uzbek parliamentarism was organized by the Legislative Chamber and Senate of the Oliy Majlis together with the international organization of world parliamentarians – the Inter-Parliamentary Union, as well as the Office of the UN High Commissioner for Human Rights, the UN Permanent Mission in the Republic of Uzbekistan and the National Center for Human Rights of the Republic of Uzbekistan.

It was attended by IPU Secretary General Martin Chungong, representative of the UN High Commissioner for Human Rights, Gianni Magazenni, heads of the chambers of the Parliament of Uzbekistan, representatives of the Organization of Islamic Cooperation, ODIHR / OSCE and other international organizations and foreign experts, deputies of the Legislative Chamber and members of the Senate of the Oliy Majlis.

This event was held ahead of the International Day of Parliamentarism.

National parliaments play a key role in international relations, ensuring well-being, protecting human rights and freedoms, strengthening the rule of law at both the national and international levels.

The event became an online platform for constructive dialogue among parliamentarians. It heard reports of the IPU, the Office of the United Nations High Commissioner for Human Rights and the Parliament of Uzbekistan.