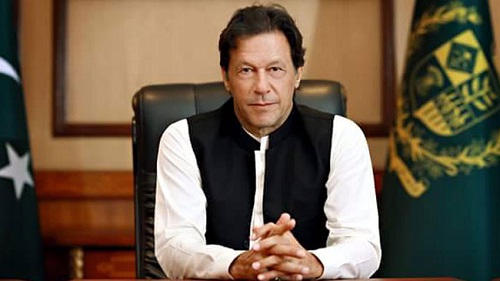 Says efforts afoot to crush PTI, to disqualify him; fears conspiracy being hatched to pit PTI against army

ISLAMABAD: Pakistan Tehreek-e-Insaf (PTI) Chairman Imran Khan said that a conspiracy was being hatched to pit the country’s largest political party against the military, which was also part of the US-backed regime change conspiracy.

Addressing a press conference here on Wednesday, he said that the regime change conspiracy has not ended and impression is being given that PTI is against the Pakistan Army, which is extremely dangerous and can damage the country.

Imran Khan warned the nation that the next phase of regime change conspiracy would be strict as the local abettors have decided to show muscles to crush and intimidate people.

He said that they chalked out a plan to crush the PTI in cahoots with Election Commission of Pakistan (ECP) under the foreign backed plan because the opponents could not win the elections against PTI; hence they wanted to knock out PTI on technical grounds.

Imran Khan further said that the foreign conspiracy was made successful by local Mir Jafar and Mir Sadiq, as when he was ousted as prime minister, celebrations started in India and Israel.

He said that that India had a problem that the PTI government and the Army were on the same page but ironically today these people ‘are labelling us traitors’.

Imran Khan said that during the Mumbai attacks, Asif Zardari made a statement that Pakistan’s DG ISI should be sent to Mumbai.

He also revealed that the PPP co-chairman had sent a message to then US administration through the former ambassador Hussain Haqqani requesting them to save him from Pakistan Army. “Now, it seems as though we are anti-military and they are patriotic,” he said, added his party wanted to see Pakistan Army strong. Every effort has been made to crush PTI but they did not sit silently, he added.

He stated that Nawaz Sharif revealed the name of the Mumbai’s attacker that he was a Pakistani, adding that it was said in Dawn Leaks that the Pakistani army was involved in terrorism.

He said that India called Raheel Sharif a terrorist, but Nawaz Sharif invited Modi to the wedding.

Talking about foreign funding, Imran Khan stated that PTI started regular political fund-raising and PTI submitted the identity cards of 40,000 donors in 2012. He termed the foreign funding case as a tool to disintegrate PTI and said that the case had no value which would be established when any court would peruse the decision.

Imran Khan went on to say that the opponents were trying to disqualify him on the certificate and Tosha Khana case; however he added that all the past prime ministers and presidents and people appointed to higher ranks got gifts, including the army chief received the gifts. He demanded that all of them should be investigated to ascertain the fact, adding that Asif Zardari took three and Nawaz Sharif took one expensive car from Tosha Khana. They wanted to implicate me in the case by doing my character assassination, he added.

He said that the shutdown of private TV was a part of this plan, as they wanted to spread so much fear that no one could air his point of view.

Imran Khan said that Western newspapers reported that drone attack in Afghanistan was carried out by using Pakistan’s soil. “I don’t know whether the air bases of Pakistan have been given again or not, but Pakistan has already paid huge price in the war against terrorism,” he added.

The PTI Chairman also raised concerns over rumours of a deal between Pakistan and the West over using the country’s airspace, warning that any such thing would only lead to further destruction and loss of life in the country.

He went on that if Pakistan became a part of that agenda again just a few dollars, the result would be the same, adding that they would get trapped in a conflict again and the loss would be colossal.

He expressed grave concerns about the rise of TTP in Swat and adjoining areas, adding that PTI leaders have started receiving threats from TTP militants, adding that to him; it seemed like another conspiracy to weaken PTI.

Talking about Shahbaz Gill’s arrest, he said that no action was taken against PML-N leaders Nawaz Sharif, Maryam Nawaz, and others when they spoke against the army. He said that Shahbaz Gill should have been allowed to clarify himself before the court if he had said something wrong.

“My life and death is Pakistan, I will not run away, hence we are more concerned about the country and want the forces to be a strong institution,” he added.

He said that PTI has street power to block the entire country, but they would not resort to it but instead stage peaceful protests just because they did not want to damage the country.

Imran Khan expressed his apprehension that these few people were making such a plan for their personal interest; hence he was worried that no such decision should be taken which compromised the national security. He reiterated that the only solution to the prevailing crisis in the country was free and fair elections.