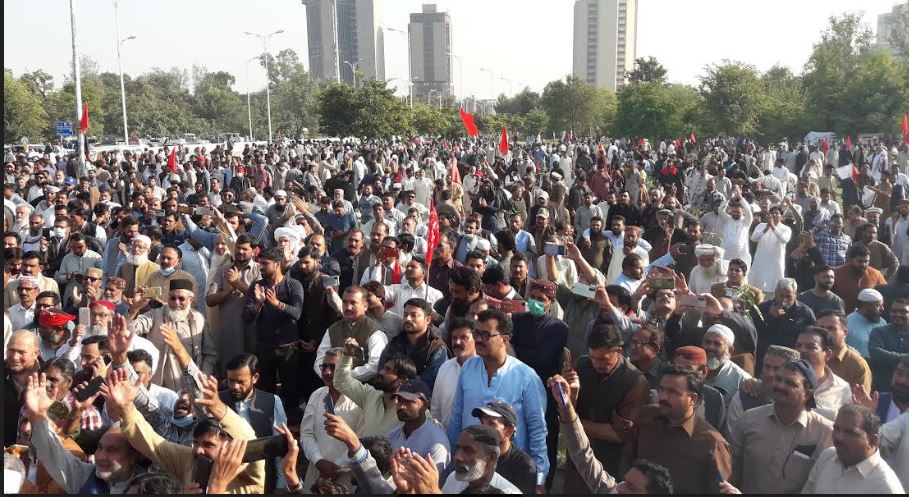 ISLAMABAD, NOV 9 /DNA/ – Thousands of electricity workers all over the country held a mass protest rally today at Islamabad under the aegis of All Pakistan WAPDA Hydro Electric Workers Union C.B.A along with the Electricity Engineers Association before Islamabad Press Club demanding to the Prime Minister of Pakistan to intervene to get stopped privitization of electricity distribution companies in the wider public interest. Since the experience of the privitization of Karachi Electric Supply Company and Rawalpindi and Multan Private Electricity Companies and Thermal Power Houses had already miserably failed instead of that, productivity of the electricity distribution companies may be raised and prevent theft of electricity from lawless elements and improve the Administration of companies. Since those companies worth trillion of rupees of national assets had been handed over to the Private Members B.O.D Companies who had no investment even of single rupee.

The protesters were carrying national flags and banners in support to their demands and raising slogans long live Pakistan and down with proposed privitization of electricity.  Thereafter, the protesters held a march raising slogans and held a mass rally at Islamabad. It was addressed by veteran trade union leader Khurshid Ahmad, Abdul Latif Nizamani President, Haji Ramzan Achakzai Vice President, Haji Iqbal Khan Provincial Chairman KPK, Javaid Iqbal Baloch, Tariq Niazi, Imran Khan and other representatives of the union and Electricity Engineers Association. Veteran trade union leader Khurshid Ahmad addressing to the protesters reminded to the Prime Minister of Pakistan and Policy Makers and all political parties that electricity is basic need of 220 Millions citizens and National Industrial and Agriculture and Commerce. Whereas, the Father of the Nation had declared that Industries of Public Interest would be run under the Public Sector. The far higher cost of Private Thermal Power Houses should get reduced. That high price of cost of Generation of Electricity in Dollars being paid at the rate of 50 to 60% cost even not using electricity of private Thermal Power Houses and develop cheaper source of Hydel and GAS Thermal Power General and hand over the control to WAPDA instead of private members of B.O.D who have no investment of single Rupees and had been made as if those owners of the electricity companies worth Trillion Rupees and save the electricity workers from becoming victim of tragic fatal and non-fatal accidents due to serious shortage of staff requiring them to work doubly. By a resolution, it was also demand to the Government to save the workers unsafe working conditions due to serious shortage of staff requiring them to work doubly at the risks of their lives and demanded to the Government that for safety to workers during the course of prevention of theft of electricity against lawless elements may be ensured alike Railway employees, since almost three workers had been killed at Islamabad.=DNA