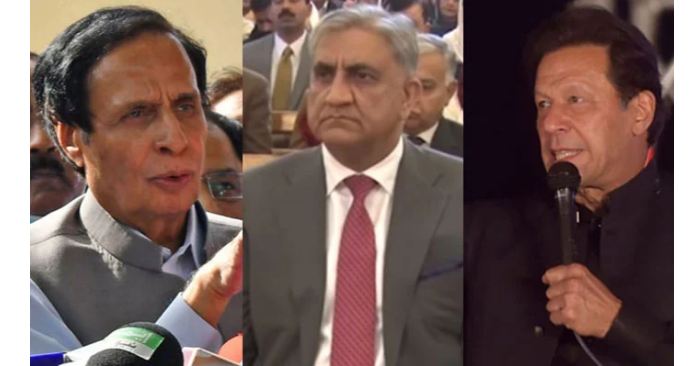 LAHORE, DEC 18: Punjab Chief Minister Chaudhry Parvez Elahi has said that he and his party will be the first ones to defend General (retd) Qamar Javed Bajwa if anything further is said against the former army chief.

“I felt very bad when Khan was speaking against Gen (retd) Bajwa,” Parvez said adding that the former army chief was a “benefactor” and nothing should be said against benefactors.

“Gen (retd) Bajwa has many favours on him [Khan] therefore the favours shouldn’t be forgotten,” the Punjab CM reminded the PTI chief.

He said that they are allies of PTI instead of opponents but they can’t forget the favours of their “benefactors”.

“General [retd] Faiz Hamid committed many abuses and tried to send [us] behind bars. He was against us,” Parvez said.

“We agreed immediately when Imran Khan asked to dissolve [Punjab] Assembly,” he added.

On Saturday, Khan in his address to PTI workers criticised the former army chief (retd) Gen Bajwa saying that he “foresaw the removal of his government” and was aware that some elements wanted to impose Shehbaz Sharif as the prime minister.

The former premier was flanked by Parvez and CM Khyber Pakhtunkhwa Mahmood Khan.

“General (retd) Qamar Javed Bajwa told me that he did not want this (Shehbaz becoming PM to happen). So who is responsible? Will anyone tell me this? Gen (retd) Bajwa would tell me that the [ incumbent rulers] are corrupt.”

But not conceding defeat, Imran said that the Pakistan Democratic Movement (PDM) move to remove him “was in my favour” as I have received “unprecedented respect”.

“Gen (retd) Bajwa thought the PM and Ishaq Dar are geniuses and will manage the country,” the PTI chairman said, adding that the former army chief realised the nation’s support for Khan’s party after toppling the government.

The former prime minister further said that his party’s popularity increased after April, following his ouster from the government due to a no-confidence motion moved by the then-opposition.

“We haven’t seen such cruelty even during Gen (retd) Musharraf’s time after what Gen (retd) Bajwa did to us,” he said.

The former premier added that corruption worth millions of rupees was “forgiven” by the incumbent leaders — and that is why they wanted to cling to power.

The former premier said that he was told about the threat to his life when he was leaving for the march. “Who would put their lives in danger for money or power?” Khan questioned.

On December 2, PML-Q leader Moonis revealed that former army chief General (retd) Bajwa had advised them to back PTI when the no-confidence motion was moved against former prime minister Imran Khan, The News reported Friday.

Moonis, during an interview with a private TV channel, said that both PTI and Pakistan Democratic Movement (PDM) had made offers to them, however, Gen (retd) Bajwa asked them to support the Imran Khan-led party.

“Certain elements are busy on social media bashing Bajwa sahib without any reason. This is the same Bajwa who changed the course of rivers for the PTI. Then he [Bajwa] was right, but now he is not. I have a total disagreement with those who are now talking against him,” Moonis said.

“When he was giving you all-out support, he was right,” the PML-Q leader said, wondering if Bajwa had now become a traitor to them.

“I’ve asked PTI office-bearers to sit with me on a TV show and prove that he is a traitor, and I will tell you exactly what he [Bajwa] has done for you.”

Moonis said that there was no doubt that the former COAS fully supported the PTI, but when he withdrew his support, he had become a bad person. “This is a bad example and I have a disagreement with them on it. He [Bajwa] was never against the PTI.”

“Had he [Bajwa] been against them [PTI] at that juncture, he just had to give a signal, and we would have been sitting with them [PDM],” Moonis said.

The PML-Q leader added that his inclination was with PTI and he also talked to his father on the matter.