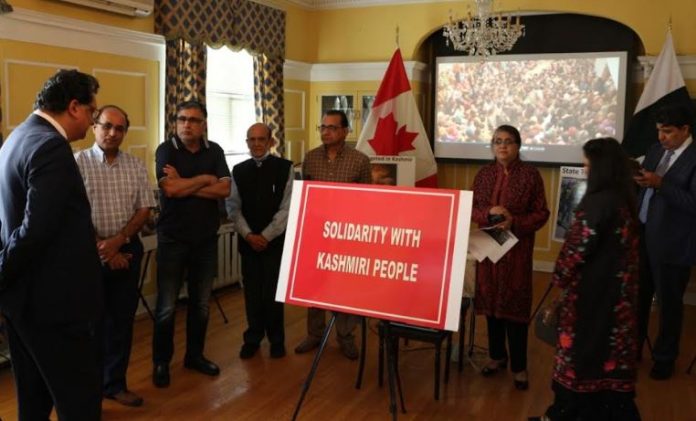 OTTAWA, AUG 5 /DNA/ – Like Pakistan and elsewhere in the world, Youm e Istehsal Kashmir was observed in Canada by the Pakistan High Commission and the Pakistani and Kashmiri diaspora to condemn India’s illegal and unilateral actions of 5 August 2019 in the Indian Illegally Occupied Jammu and Kashmir (IIOJ&K), and to pay homage to the sacrifices of Kashmiris for their just struggle to self-determination.

The activities included a photo exhibition arranged at the Pakistan High Commission in Ottawa to highlight human rights violations in IIOJ&K, demonstrations by Pakistani and Kashmiri communities in Ottawa, Toronto and Calgary, movement of a Kashmir HR violations-themed truck on main roads in Toronto and a high-level webinar attended by Advisor to the Prime Minister on Kashmir Affairs Qamar Zaman Kaira, High Commissioner for Pakistan to Canada Zaheer A. Janjua, former Pakistan Ambassador Karamatullah Ghori and noted Canadian author and journalist Robert Fantana.

Addressing the webinar hosted by Consul General of Pakistan Toronto Abdul Hameed, Advisor to the Prime Minister Qamar Zaman Kaira termed the Indian actions of 5 August 2019 a blatant violation of the UN Charter, the 4th Geneva Convention and international laws.

He noted that for the last three years India had tried every tactic of oppression against the Kashmiris but their resolve and passion for freedom had not weakened. He said the people of Pakistan stand firmly behind their brothers and sisters in Kashmir and Pakistan’s moral, diplomatic and political support to the Kashmiris shall continue until India ends its gross and systematic violations of human rights in IIOJK, revokes its illegal actions of August 5, 2019 and grants the Kashmiris their inalienable right to self-determination.

Speaking on the occasion, High Commissioner Zaheer A. Janjua said it was no secret that India had taken its illegal and unilateral actions on 5 August 2019 to suppress Kashmiris’ freedom struggle, deny them their right to self-determination and change the demographic structure of the valley.

He said Indian atrocities committed in IIOJ&K were well documented by the UN and other international human rights organizations and even the Human Rights Watch, in a statement earlier this week, had confirmed that the Indian authorities were restricting free expression, peaceful assembly and other basic rights in Jammu and Kashmir. The Human Rights Watch has also noted that the Indian government’s repressive policies and failure to investigate and prosecute security force abuses have increased insecurity among Kashmiris, he added.

Earlier, a pictorial exhibition was also arranged by the Pakistan High Commission Ottawa to mark the Youm-e-Istehsal and highlight the Indian atrocities in IIOJK. Meanwhile, a truck painted with pictures depicting human rights abuses and calling for end to Indian repression in the IIOJK also plied the main roads in Toronto as a mark of solidarity with the people of IIOJ&K and their right to self-determination.