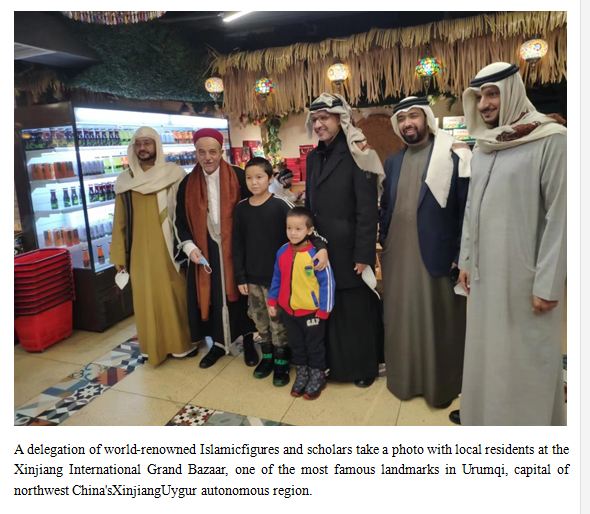 “This is my second visit to Xinjiang, and it feels like I’m back home,”said Ali Rashid Al Nuaimi, Chairman of The World Muslim Communities Council, who recently led a delegation to northwest China’s Xinjiang Uygur autonomous region at the invitation of the local government.

The delegation, which consisted of more than 30 world-renowned Islamicfigures and scholars from 14 countries, including the UnitedArab Emirates(UAE), Saudi Arabia, Egypt, Bosnia and Herzegovina,Serbia, and Tunisia, arrived in Urumqi, capital of Xinjiang, on Jan. 8.

Many members of the delegation expressed support and high recognition for Xinjiang’s efforts and achievements in counter-terrorism and de-radicalization.

At the Xinjiang Uygur Autonomous Region Museumin Urumqi, members of the delegation stayed for a long time in front of exhibition boards showing information about the ancient Silk Road. They reviewed the several thousand years of history of exchanges between their own countries and China and talked freely about the prospects for cooperation with China.

China is a major country with global influence and has been contributing to global economic recovery in recent years, said Mustafa Cerić, former Grand Mufti of Bosnia and Herzegovina, adding that he hopes that China will continue sharing development opportunities with the rest of the world.

Members of the delegation showed great interest in the Twelve Muqams, a traditional artform known as the “Mother of Uygur Music”. They used their mobile phones to record the melodious tunes and wonderful dances while enjoying performances of the Twelve Muqams, which has been listed among the first batch of national intangible cultural heritage items in China.

The Chinese government has made tremendous efforts to protect intangible cultural heritage of Xinjiang and has promoted it globally, which is of great significance to the diversity of civilization, pointed out Mauritanian writer AbdallahUld Mohamadi Bah[u2] .

Before the visit to Xinjiang, Serbian MuftiMevlud ef. Dudićhad only seen China on TV and in newspapers, according to the mufti, who said that he has finally seen with his own eyes how his fellow Muslims live in peace and happiness in Xinjiang.

During their visit to the Xinjiang International Grand Bazaar, one of the most famous landmarks in Urumqi, members of the delegation were fascinated by various kinds of dried fruits, Atlas silk, a time-honored type of cloth used by Uygur women for centuries, and other specialties of the autonomous region.

They talked cordially and took photos with people at the bazaar, while shop assistants were busy packing the tourist souvenirs and local specialties they bought from the shops in the bazaar before sending them to their countries.

While visiting the Urumqi International Land Port Area in Urumqi, members of the delegation observed the operations of the China-Europe freight trains and ports in Xinjiang, including the Alashankou port and the Horgos port, through real-time video link, and gasped with admiration at the rich fruits Xinjiang has achieved in pushing forward with the opening-up and high-quality construction of the Belt and Road Initiative (BRI).

With sound infrastructure, human resources, as well as other conditions for economic development, Xinjiang can play an important role in making the trade between China and countries along the routes of the BRI smoother, more convenient, and faster, said SaraFalaknaz, a member of theFederal National Councilof the UAE.

A delegation of world-renowned Islamicfigures and scholars take a photo with local residents at the Xinjiang International Grand Bazaar, one of the most famous landmarks in Urumqi, capital of northwest China’sXinjiangUygur autonomous region.