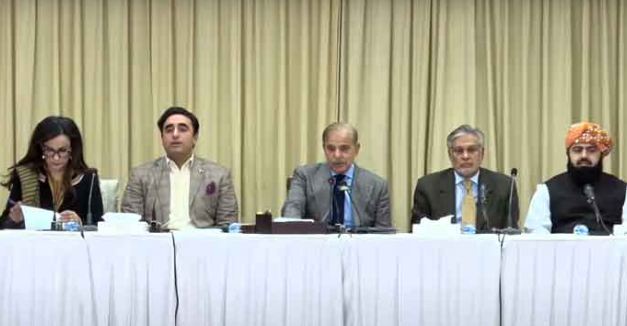 ISLAMABAD: Prime Minister Shehbaz Sharif Wednesday said the world reposed trust in Pakistan and pledged worth over $9 billion in flood aid despite indiscriminate propaganda by the rivals — Pakistan Tehreek-e-Insaf (PTI).

Addressing the media after a “highly successful” donors’ conference in Geneva alongside his cabinet members, the premier said the government would continue to help the people affected by cataclysmic floods till their complete rehabilitation.

“At the conference, pledges worth $9.7 billion were announced for the Pakistan flood victims,” the PM said, congratulating his federal ministers for the hard work they and their teams put in before this critical conference.

The premier said that the world reposed trust in Pakistan despite the worst propaganda against the government, crediting his team for the success.

“The ball is now in our court. We now have to transparently spend every single penny on the people’s prosperity.”

He said the presence of the representatives of all the provinces at the conference sent the message to the world that “we are united”.

“The global community showed confidence in the coalition government of Pakistan.”

“The perception created by some people that the country is alone was busted as both the superpowers were standing right and left,” he added.

When asked about the conditions of these funds pledges at the conference, the prime minister said IDB’s terms will be soft.

Slamming the provincial governments for failing to handle the flour crisis, the prime minister said wheat stocks were enough to meet the demands of the country but the local authorities couldn’t manage the situation.

“We were not sitting idle. This is a provincial matter and they should answer for this.”

He also rubbished the claim that the top functionaries of the provinces where the PTI is ruling were ignored by the PDM government.

“Sindh was the most affected province from the floods then comes Balochistan. Chief secretary was there to represent the provincial government.”

He said that there was no flood in Azad Jammu and Kashmir while Gilgit-Baltistan’s Ghaddar area was affected, adding Khyber Pakhtunkhwa (KP) Finance Minster Taimur Jhagra was also present at the conference.

About the worsening law and order situation in KP, the prime minister said the National Security Committee (NSC) discussed the issue in detail.

“To restore peace in the country is the responsibility of federal and provincial government.”

He once again thanked the UN secretary-general for forcefully pleading the case of Pakistan at the Geneva conference.

About his upcoming visit to the UAE, Shehbaz Sharif said he is visiting the Gulf state tomorrow and expressed confidence that it will help further augment bilateral relations between the two countries.

Speaking on the occasion, Foreign Minister Bilawal Bhutto, pointing toward PM Shehbaz, said “your foreign policy has been successful”.

The top Pakistani diplomat, who was with the premier at the conference, said the government achieved two targets with one shot.

The support from the international community proved that Pakistan is not isolated as propagated by the government’s rivals, indirectly referring to the PTI.

“The world is ready to invest over $9 billion in Pakistan and the impression about the country’s economy has also been buried through the conference.”

The PPP chairman added that now they would put in concerted efforts and help flood victims to steer them out of the crisis.

Bilawal Bhutto said that the world is in a crisis due to the Ukraine war.

“We still need support on humanitarian grounds. A cold wave is expected in flood-hit areas where people are living under the sky.”

He appealed to help the victims.

The foreign minister assured the flood-affected population that their recovery and rehabilitation is the mission of the government.

‘No threat of default’

Meanwhile, Finance Minister Ishaq Dar said the time frame of three years has been set for the reconstruction phase.

He said both the federal and provincial governments from their development budgets will also contribute funds for this purpose.

As regards the economic situation of the country, Ishaq Dar said that a detailed meeting has been held with the International Monetary Fund.

He said Pakistan faces no threat of default and there is nothing to worry. “All the external debt liabilities will be made on time.”