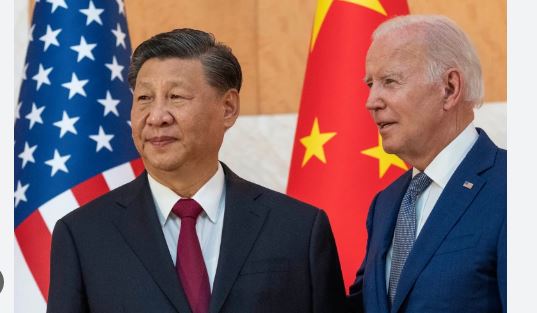 Ice may not be melting at the poles of world only, but on political equators it has also smelted, as supremos of two global powers shook hands on the sidelines of G-20 at Bali. President Xi and President Biden met for the first time that too after both yielded firm grip on their respective thrones, Xi being reelected in CCP’s 20th national conference and Biden under Democrats victory in mid-term elections.

None expected the diplomatic détente between the two countries amid growing tensions over range of issues including Taiwan and Russia-Ukraine crisis.But the leaders conventussurprisingly held for around three hours discussing various concerning issues over “candid” interaction.

The official statements issued gave a glimpse that both the countries are firmly standing on their diplomatic grounds over concerning issues specially Taiwan and this meeting was more of an effort to maintain US-China relations for further deterioration rather improving them. The U.S. also, in a statement, emphasized that its one-China policy had not changed and that it opposed any unilateral changes to the status quo. President Biden’s pressed upon on US policy over Taiwan and at the same time stated that he doesn’t think China has ‘imminent’ plans to invade Taiwan. Whereas policy influencers in Washington hold contrary view that opining that China might aggressively push for Taiwan in 2023-24. However, it is unclear if this inference by strategic thinkers in USis more of a strategic wish or a concluded study.

On the other hand, Chinese statement mentioned that Taiwan is core to the Chinese interests and it is the first red line that must not be crossed in China-U.S. relations, ironically it seems that it was not crossed but steeped on in August of this year. Moreover, China also stated that “China-U.S. relations should not be a zero-sum game where one side out-competes or thrives at the expense of the other and China has no intention to challenge or displace the United States status” but the question remains, is competition ever about win-win situation?

The statements by both the leaders are understandable as they have to show at home and abroad to their allies that why they are perfect fit for the job of world leader. But not to forget that seeing is not believing in diplomacy.

While this diplomatic intimacy between Washington and Beijing caught the limelight in hope of extinguishing the fire among two countries let’s not forget the “Realpolitik” and Thucydides mantra of realism “The strong do what they can and the weak suffer what they must” in this case no one wants to look weak and be patronized by other. Both countries might have shown consensus on continued dialogue but at the same time expressed firmness on their national objectives.

Irrespective of how much both say about co-existence and harmony, both are currently a threat for the other which is evident from the factChina is silently seeping into the international order and is altering its dynamics and Washington had a decades long focus on Asia; militarily and economically challenging the Beijing at home to contain it. These are some of underlaying realities which would remain unchanged. The US has his global hegemonic image to safeguard with military superiority and Beijing does not want any nuisances in its peaceful alteration of global order.

The good thing about the meeting was that both leaders agreed on not to further aggravate the tensions between them and put an end to cold war between the two countries. Both countries will further indulge in diplomatic rapprochement which will be followed by US secretary of State Antony Blinken to China expected in coming year.

The current détente is more of a marriage of convenience both need each other for their own international existence, China cannot afford any economic or trade embargos, at least till the time it makes world economics fully dependent on it, due to its huge population which compels China to keep the trade and economic cogs moving to feed its population. Whereas US needs China to keep its military-industrial complex in world politics.

The recent Xi-Biden meetup might have sparked hope for collaboration among great powers for the world, but not to forget that relations among nations are steered by both centrifugal and centripetal forces. Both have over time construed a narrative against the other in order to forge alliances and public support which will be considerable factor in mending bridges between the two nations. The question isn’t that whether US and China will mend the bridges, it will be mended to the extent where both suffices their national interest, but for how long as great power competition is not about win-win both zero-sum.

Syed Nasir Hassan is working with Islamabad Institute of Conflict Resolution – IICR as Program Coordinator. He has done his M.Phil in Defence and Strategic Studies, from Quaid-i-Azam University, Islamabad.