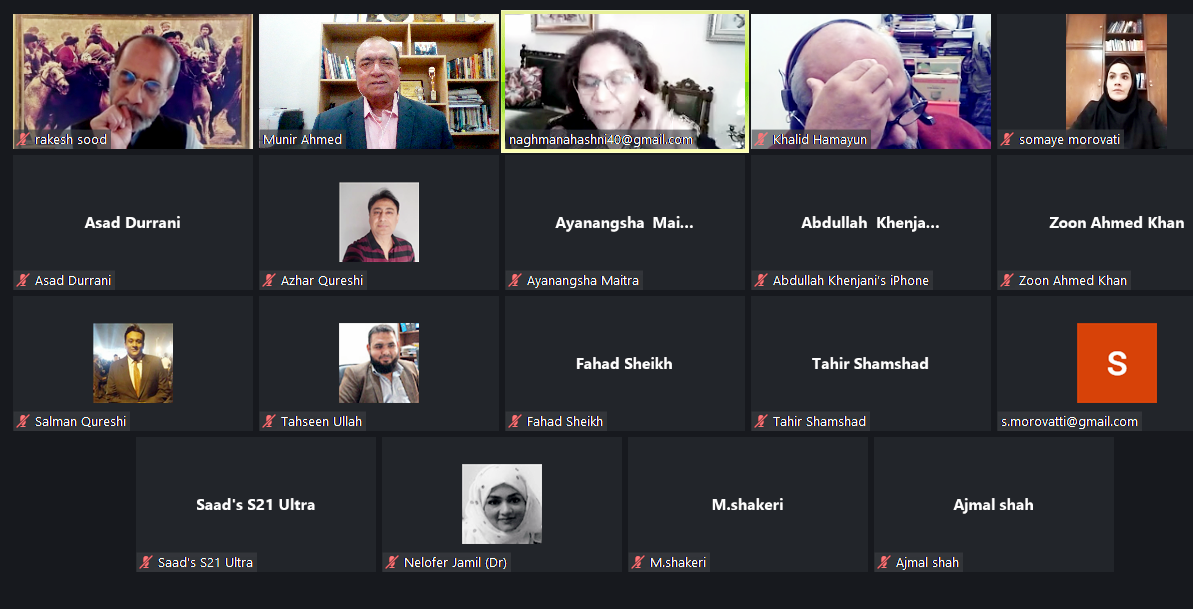 Islamabad – Speaking at a regional webinar on Saturday, the panel of experts from different countries criticised the Organisation of Islamic Conference (OIC) foreign ministers conference on Afghanistan for not coming up with a proactive action agenda to help people in crisis. However, they mentioned that the 17th extraordinary session of the OIC has driven the global focus to the humanitarian crisis in Afghanistan. The UN Security Council has adopted the aid resolution after the OIC session.

They urged the western media to take up the humanitarian crisis in Afghanistan as a trending story to kick off immediate supply of food, medicines, and winter shelter kits for common people. They urged the US government to immediately unfreeze Afghanistan’s financial assets to ease the situation.

Lt General Asad Durrani said the OIC has proved to be good for nothing once again. No immediate action plan and pledges for humanitarian aid to Afghanistan were seen. However, the conference has diverted the global attention to the war-torn country assets of which are frozen by the US. We shall not wait for the banking channels to open. Let the non-state actors act upon as early as possible through a well-defined and monitored process to support the humanitarian aid.  We knew ten years back that it would happen after the withdrawal of the US and NATO troops from Afghanistan. But intentionally never thought of any post-withdrawal plans.

He said Pakistan would be the biggest loser if it could not play its due role in Afghanistan at the time of crisis. This is unfortunate that Muslim world is yet to come up with any joint action plan to combat the humanitarian crisis beyond the political differences with Taliban.

Ambassador Naghmana Hashmi appreciated Pakistan’s role in organising the OIC foreign ministers conference that could attract the world focus to Afghanistan. Pakistan has always been active on the Afghanistan issue, supporting it more silently and with pro-Afghanistan diplomacy. She said China has good relations with Afghanistan whatever the government was there in Kabul. Never interfered in the internal politics, and kept on infrastructure development and economic interventions. China is expected to come forward to more infrastructural development and support to the education and health sectors.

Ambassador Rakesh Sood commenting on the ‘OIC Trust Fund for Afghanistan’ said the conference did not share any mechanism that how this fund would work, and where the money would come from. The world was expecting any concrete plans from the OIC countries. China is gaining more influence and space in Afghanistan with their meagre investment plans, their aid will be much minimal. The US and the western countries will not be coming back to help the Taliban driven government. They will only be interested in stopping the influx of refugees to their countries. This may help to get them engaged in aiding Afghanistan. It is unlikely for India to come back soon to Afghanistan to open its embassy after the violent groups had attacked Indian assets in Afghanistan. However, if Pakistan keeps its road link open to neighbouring countries including India, humanitarian aid may flow from Delhi.

Abdullah Khenjani said the “so-called Islamic world” is shallow and has nothing to help the suffering common citizens in Afghanistan. The western media is silent and so are their countries too. We have been voicing for help for the last three months but no action but only a pledge a couple of days back in the UN Security Council. Anger is rising up in Afghanistan as Taliban could not come up with indigenous initiatives, and could not include the left behind groups. No way forward is seen for the management of political, cultural and ethnic diversity in Afghanistan.

Zoon Ahmed Khan said China has been proactively supporting the construction and stability of the Afghan economy over the years, and will continue to do it. China is on humanitarian support as well.