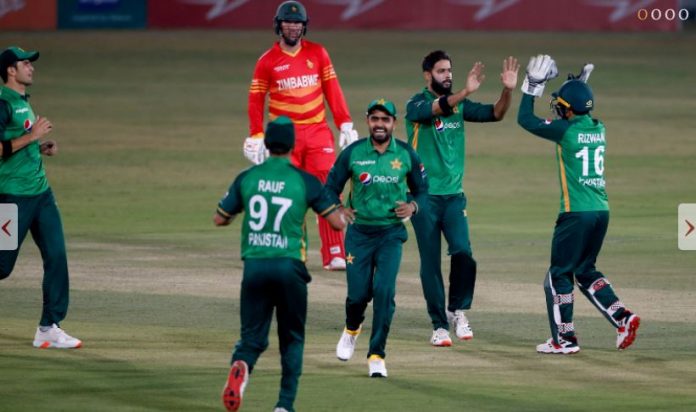 Zimbabwe were four for 161 runs after 34 overs as the chased a 282-run target set by Pakistan in their series-opening one-day international being played at the Pindi Cricket Stadium on Friday.

The tourists need 121 runs off 96 balls. They got off to a shaky start when Shaheen Shah Afridi bowled opener Brian Chari (2) on the third ball of the innings.

The next breakthrough for Pakistan came in the fifth over when Afridi bowled Zimbabwe captain Chamu Chibhabha (12). Zimbabwe were 28 for two at the point.

Craig Ervine gave some stability to his team and scored 42 before he was caught by Haris Rauf on a ball by Imad Wasim in the 22nd over. Sean Williams (4) could not do much at the crease and walked back to the pavilion in the 27th over after being caught behind by Mohammad Rizwan on a delivery by Wahab Riaz.

After winning the toss, the Green Shirts ended their innings with 281 runs at the loss of eight wickets in their allotted 50 overs.

With six fours and two sixes, Haris Sohail tried to stabilise the team scoring 71 off 82 balls but he fell to Sikandar Raza in the 42nd over.

Earlier, captain Babar Azam had won the toss and elected to bat.

Both teams are opening their World Cup Super League campaigns after the International Cricket Council introduced the competition to bring context to ODI cricket.

The top seven teams in the league will directly qualify for the 2023 Cricket World Cup in India. The league features 13 countries playing four three-match ODI series (home and away).

Babar, who leads Pakistan in Twenty20s, will be captaining for the first time in the ODI format. He was appointed ODI captain during the lockdown for the Covid-19 pandemic.

Pakistan gave an ODI debut to fast bowler Haris Rauf, who received his cap from bowling coach Waqar Younis before the toss.

The home team has packed its playing XI with four fast bowlers, with allrounder Faheem Ashraf getting a nod ahead of uncapped leg-spinner Usman Qadir.

The Zimbabwe series, which also features three Twenty20 Internationals at the same venue, is the beginning of a busy season for Pakistan who are also slated to host England and South Africa.

Yesterday, during a pre-series press conference, Babar said the hosts won’t underestimate low-ranked Zimbabwe, against whom Pakistan have won 52 of the 59 matches in this format.

“Our aim is not only to win the one-day series but also the T20 games [against Zimbabwe] because we want to build confidence for matches against stronger teams which Pakistan will play in the coming months,” Babar said. “But having said that we can’t take Zimbabwe easy and my message to our players is to give 110 per cent because we are targeting a whitewash to ensure Pakistan earn maximum points in the Super League. Every match counts since each point matters.”

Chibhabha, meanwhile, admitted that his side is desperately looking to get to winning ways after failing to qualify for the 2019 World Cup in England and said Zimbabwe would adopt an aggressive approach in batting to combat the threat of Pakistan bowlers such as Shaheen Shah Afridi and Wahab Riaz.

“Unless we are able to dominate the [Pakistan] bowling, there is no chance for Zimbabwe to win matches. I promise we are going to play good cricket and are not here just to compete,” Chibhabha vowed. “We have been a side which struggles in finishing matches. But there is more desperation on our part to win and win consistently. And considering these are Super League matches, each game becomes very crucial for both teams.”