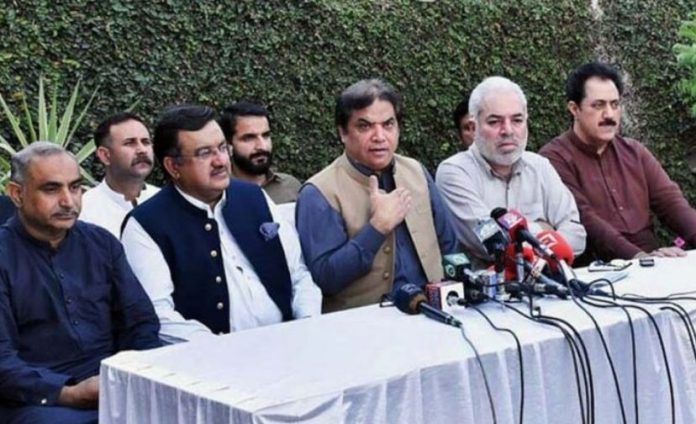 ISLAMABAD: PML-N leader Hanif Abbasi on Thursday resigned as special assistant to the prime minister (SAPM) after the Islamabad High Court (IHC) had stopped him “temporarily” from performing his duties.

In a letter dated June 1, a copy of which is available, addressed to Prime Minister Shehbaz Sharif, Abbasi said that he would be “unable to perform at present” and requested the premier to accept his resignation while thanking him for the opportunity.

On Thursday, the Cabinet Division issued a notification stating that the PM had accepted the resignation under Schedule V-A of the Rules of Business, 1973, and removed Abbasi from the post with immediate effect.

The PML-N leader was notified as a SAPM, with the status of federal minister, on April 27. However, he had not been assigned a portfolio.

The development today comes after IHC Chief Justice Athar Minallah barred Abbasi from working as SAPM last month. The directives were issued while hearing a petition filed by former interior minister and Awami Muslim League (AML) chief Sheikh Rashid, who had challenged Abbasi’s appointment as SAPM on the grounds of his 2018 conviction in the ephedrine case.

During the hearing on May 17, the court observed that a person who has been convicted could not hold public office.

Abbasi’s lawyer, Ahsan Bhoon had argued that the office of the SAPM was not like other public offices. However, Justice Minallah had ruled that the SAPM’s job was to advise the prime minister and he could do so without a notification as well.

Rashid had filed the petition challenging Abbasi’s appointment on May 6 through his counsel Barrister Sajeel Shaharyar in which the Cabinet Division and Abbasi were nominated as respondents.

The petition pointed out that the Anti Narcotics Force (ANF) on July 21, 2012, registered an FIR against Abbasi under Section 9-C, 14 and 15 of the Control of Narcotics Substance Act, 1997 for selling 500kg ephedrine to drug smugglers instead of using the controlled chemical in medicine.

As per the charge sheet, the two officials of Arafaat Traders, the Karachi-based medicine distribution company to whom Abbasi claimed to have supplied 11,000 ephedrine-containing tablets denied Abbasi’s claim, the challan revealed, though the same company had earlier confirmed before the ANF that Abbasi had provided them ephedrine-containing tablets.

The CNS Court on July 21, 2018 found Abbasi guilty of selling 500kg of ephedrine to narcotics smugglers and a fine of Rs1 million was imposed on the PML-N leader along with the life sentence.

Seven other accused were acquitted in the case.

The sentence, however, was suspended in April 2019.

Rashid, in the petition, pointed out that the Lahore High Court vide order dated April 11, 2019 “only suspended the sentence of the Respondent No. 2 [Abbasi] and not the conviction” adding that “the conviction stood intact for all intents and purposes.”

Subsequently, Abbasi “is disqualified from holding the public office”, the petition said.

It said that “in the middle of April 2022, due to change in regime, a new government was formed and respondent No 2 was appointed as the special assistant to the prime minister.”

The petition termed the said appointment as illegal, unlawful and unconstitutional as Abbasi was inherently disqualified from holding this prestigious public office.

The petition requested the court to set aside the notification for the appointment of Abbasi as SAPM.