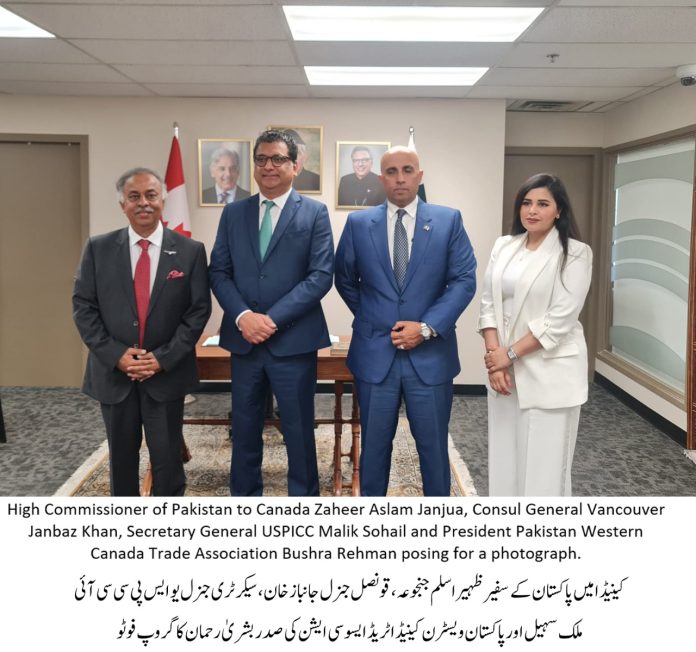 Private sector to be encouraged in a push to boost trade ties: Zaheer Aslam Janjua

The High Commissioner of Pakistan to Canada Zaheer Aslam Janjua has said that bilateral trade between Pakistan and Canada will be increased and private sector would be encouraged in a push to boost trade ties.

Pakistani business community should focus on Canada for exports which offer excellent business opportunities, he said.

High Commissioner Zaheer Aslam Janjua said this while speaking at a ceremony held in connection with the inauguration of the new premises of the Consulate General of Pakistan in Vancouver.

He said that the political leadership of Pakistan want to capitalize on the trade potential between Pakistan and Canada and we will extend cooperation to the private sector of both the countries in this regard.

Zaheer Aslam Janjua said that both countries enjoy exemplary ties but the bilateral trade needs to be increased for which linkages, information, exchange of trade delegations and holding exhibitions are of vital importance.

Pakistan-Canada relationship is robust and underpinned by strong people-to-people ties, he said, adding that Pakistan was the fifth-largest source of immigration to Canada, with more than 250,000 Pakistanis living in this country, he added.

Malik Sohail Hussain said that the Pakistani business community should explore opportunities in Canada and students should try to get higher education in Canadian universities with would-class education in various subjects.

He said that USPICC will hold a food and cultural festival in Western Canada which will go a long way in improving ties between both the countries as a sizable number of Pakistani expatriates are living there and playing important role in the development of Canada.

Malik Sohail said that different Pakistani associations in Canada will be brought together so that they can serve in a better way.

The Ambassador also inaugurated the official website of the Consulate General and PWCTA and hoped that the trade association will try its best to promote the cause of Pakistan.

He also gave away a certificate of appreciation to Ms Bushra Rehman, founder and first President of PWCTA who is a dynamic businesswoman with a lot of experience and is well known in business circles.