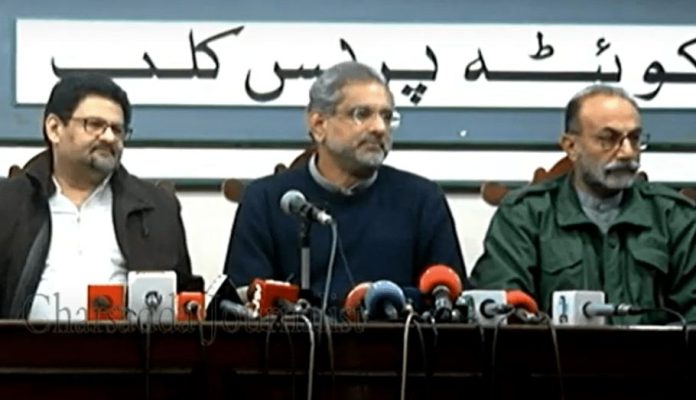 The PML-N leader has been holding a series of non-partisan talks along with other renowned political ‘mavericks’ — such as former finance minister Miftah Ismail and former senator Mustafa Nawaz Khokhar — on the current economic and political issues in the country.

The speakers blamed all stakeholders — including political parties, the military establishment and the judiciary — for the problems the masses were facing and urged them to find a way out of the prevalent political and economic impasse in light of the Constitution instead of focusing on a power struggle.

During the press conference today — jointly held by him, Ismail, Raisani and Khokar — Abbasi said: “I always say that it is the judiciary’s job to review the decisions that have had [adverse] effects on Pakistan — immense ones.

“I do not want to talk about those issues […] Whatever effect the judiciary’s decisions and actions have had in running this country, they have played a major role in the matters that plague the country today.”

At another point during the talk, he said that the speakers had not criticised anyone but themselves, adding: “We all are responsible [for the current situation], including politicians, military officials, judges [and] the media. […] We are not here to blame anyone.”

Responding to another question, he asserted: “There have been martial laws for a long time in our country. There has also been the military’s interference in politics [and] has been present — even currently.”

He went on to say: “There is a need to end it (military’s interference) and bring it within Constitutional boundaries. This in particular will give you the solution to the issues. Is it possible within a day? Only time will tell.”

Meanwhile, Ismail welcomed the government’s decision to accept all the demands of the International Monetary Fund (IMF) to revive the loan programme.

Responding to a reporter’s question, he said: “I think that the decisions not made by the government in the past four months have caused damage to the economy. However, I am now quite glad that the government has made the decision to sit and talk to the IMF.

“I welcome this decision of the government, though they incurred a loss of four months [and] of money. However, it is a good thing — better late than never.

“I hope that they will move towards finding a solution to the country’s financial issues,” the former finance minister added.

He further said when the government reinstated the IMF programme, it had “settled the economy” and terminated the country’s risk of economic default.

Additionally, Raisani asserted there was a “need for dialogue in the quagmire that our society is going through”.

He raised the recent Gwadar protests as an example of a lack of dialogue, saying that the residents of the port city demanded their basic rights but the “state put them into jails instead of providing them basic rights”.

He went on to demand, “Today through this forum, we demand that the people who the state imprisoned during the Gwadar protests […] all of their cases are taken back, they are released [and] the state fulfils all of their demands.”

The former Balochistan chief minister added that Hidayatur Rehman and Hussain Wadela — main leaders of the Haq Do Tehreek — were released two-three days ago only.

Separately, in a tweet today, Khokar thanked the session’s hosts — Lashkari, Humayun Kurd and others — and remarked that his “take-home message” from the seminar on Saturday was that the “youth here are completely disinterested in politics, which has failed to deliver on any of their issues”.

He noted that the regional political parties repeatedly raised concerns about how “parliamentary politics has solved any of our issues”, such as missing persons, fair distribution of resources and freedom from oppression.