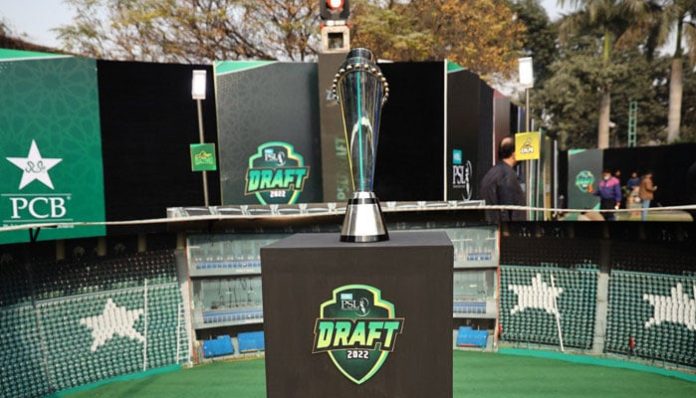 KARACHI: The players’ draft for Pakistan Super League (PSL) 2023 will be held in Karachi today, with around 1,000 local and foreign players available to be picked by six franchises for 61 slots.

Five out of six PSL teams had retained eight players, while Peshawar Zalmi retained seven players last month when the retention and transfer windows were closed.

These teams will now complete a squad of 18 — which will have three players each in platinum, diamond, and gold categories, five in silver category, two in emerging and up to two in supplementary categories.

Teams can have up to three foreign players in the first three categories — platinum, diamond, and gold — among them one overseas player is mandatory in platinum and diamond.

In a squad of 16, teams have to pick five overseas players, while in 18, they can have six foreign players.

As many as 517 foreigners and 491 Pakistani players are available for selection tomorrow.

Defending champions Lahore Qalandars will make the first pick in the draft. Quetta Gladiators and Multan Sultans will have second and third picks.

The fourth and fifth picks will be done by Karachi Kings and Islamabad United, while Peshawar Zalmi will make the sixth pick in the opening round.

Qalandars will have one pick in diamond and two in the gold round, and three in the silver category. They can also add one player from the emerging category to their squad of 16 before adding two supplementary players to the squad.

Karachi Kings had retained Mohammad Aamir, Shoaib Malik, and Imad Wasim in the diamond category, and they will not pick any player in this round but they’ll have all three picks available in the gold round.

Sultans have three picks in the first nine rounds and for them, it is also mandatory to pick at least one foreign player in the platinum category. They also have all five silver picks available.

Islamabad have two picks in platinum, one in diamond and none in the gold category. They have three silver rounds picks as well along with two emerging and two supplementary picks available.

As they didn’t retain any foreign players in the top nine slots, they’ll have to pick all their three initial picks to draft overseas players.

Peshawar Zalmi, who earlier today named Babar Azam as their new captain, have two platinum picks available along with one diamond and two gold round picks.

The list of players retained by franchises is as follows.