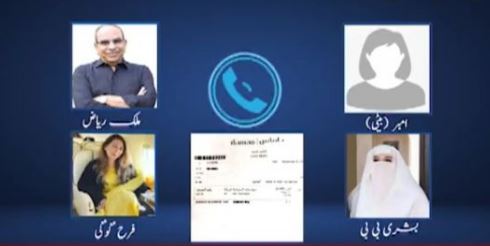 LAHORE: Punjab government spokesman Ataullah Tarar Sunday revealed an alleged audio recording of a conversation between property tycoon Malik Riaz and his daughter Amber Riaz in which the two could be heard discussing how the former first lady Bushra Bibi refused to accept a three-carat diamond ring from them.

The audio was brought to the fore by Tarar and PML-N Secretary Information Azma Bukhari during a press conference in Lahore today.

In the alleged audio, Amber could be heard telling her father — who enjoys congenial relations with all Pakistani politicians — that she had sent the then-first lady a three-carat diamond ring which she had refused to accept.

Without mentioning Farah Gogi’s name in the audio, Amber said that she had a meeting with “her” (Farah) on Saturday, therefore, a five-carat diamond ring should be arranged for Bushra Bibi before that, adding that the ring would cost Rs10 million.

Amber further told her father that she (Farah) had told her that it was “no big deal for the first lady to own a three-carat ring, therefore, it was “unbecoming of them to send her something that everybody could own.”

Upon hearing that, Malik Riaz could be heard telling his daughter “to get the ring that they (the first lady and Gogi) were demanding.”

During the call, Amber could also be heard telling her father that the “locked doors to his sites will be opened the next morning”, adding that “she” (Farah) had assured her that she received a call from Imran Khan.

“She (Farah) told me that she had received a phone call from Khan Sahab and said that he would take guarantee for the closure of the [cases] for which the reports have been submitted to him. You will also get a letter from Shahzad Akbar tomorrow,” Amber could be heard telling her father.