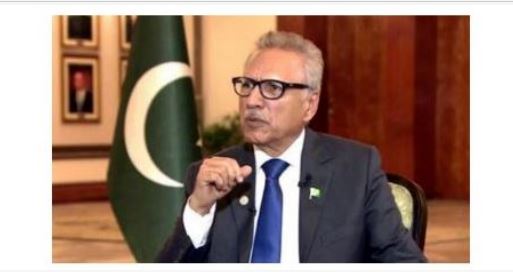 DNA
Islamabad, JUN 5: President of Pakistan has condemned in strongest possible words the hurtful comments of India’s BJP leaders about the Holy Prophet (PBUH) and said that these derogatory and controversial remarks have hurt the feelings of all Muslims around the world.
This, he said, is the reflection of growing trend of Islamophobia in India where Muslims lives in millions.  The President said that  merely suspending and expelling party officials isn’t enough but BJP must shun and denounce its extremist and fascist Hindutva ideology.
He said that India under Modi’s hateful Hindutva  philosophy is trampling religious freedoms of all its minorities and persecuting them without any impunity.
“Allowing such Islamophobic remarks to continue without punishment constitutes grave danger to the protection of human rights and may lead to further prejudice and marginalization which will create a cycle of violence and hate”, he added.
He called upon the World community, United Nations and international human rights organizations to take a serious notice of rising Islamophobia and systematic religious persecution in India without impunity and take all steps necessary to put an end to it.