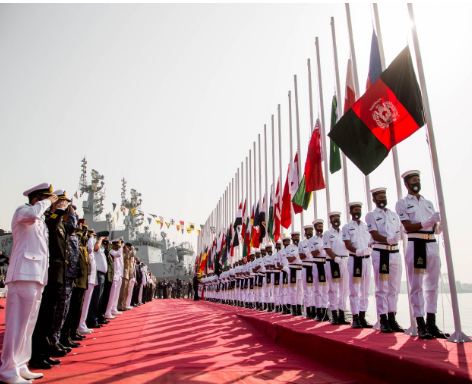 Since 2007, the Pakistan Navy has had the honour of conceptualising and hosting the AMAN series of exercises, which promotes peace at sea. The exercise includes a multinational exercise with friendly regional and extra regional naval forces, which has been essential in raising the morale of the Pakistan Navy. In order to ensure effective maritime security in the Indian Ocean Region, it is necessary to establish relationships, improve compatibility, and increase mutual understanding among navies (IOR).

While interacting with all the participating navies through joint bilateral and multilateral exercises, Pakistan Navy has proudly been able to claim the growing stature of the exercise and the largest participation of representatives of about more than forty friendly nations.

Pakistan Navy is conducting the AMAN series of exercise biennially since 2007 and the 8thof its edition has been scheduled in February 2023.The aim of the exercise is to establish Responses, Tactics, Techniques and Procedures against conventional and unconventional threats faced by today’s world.Therefore, these exercises play an important role for formation of a joint strategy among the participating navies to develop a united approach for the regional maritime security. Moreover the exercise includes enhancement of professional expertise in capability of joint operations and regional peace and security. Thus, this authenticates the exercise’s declared resolve of ‘Together for Peace.’

The resolve will not only help to eradicate terrorism and pledging peace and harmony in the region, but in fact the regional navies can ensure a smooth route to prosperity via trade, by strengthening multi-layered security cooperation and enhancing inter-operability in Naval Ops and cross culture interaction.

Pakistan Navy believes in inclusive policy and if the world stands together, there will be great benefits for all. The IORis experiencing swift geostrategic changes which have arose a number of challenges for Pakistan but have also provided many opportunities that promise a security improvement not only within Pakistan but also in the region at large.

The strategic security environment of the world is being transformed by dynamism observed in global maritime trade and therefore, there requires an increase in security arrangements in and around theIOR. Regional nations that heretofore have provided periodic coastal protection may find they must expand patrols from the Strait of Hormuz to Egypt’s Suez Canal, transiting between the Red Sea and the Mediterranean and down the east coast of Africa to secure the waterways.  The Arabian Sea and Eastern waters would always be of immense importance and cannot be ignored. Hence, AMAN exercise also targets this particular aspect to warrant global Maritime security.

Furthermore, to combat the design to maintain Maritime Superiority by certain countries, especially in IOR, Pakistan encourages the nations to join hands and equip themselves to face traditional as well as non-traditional threats in the Sea. Maritime security challenges in the IOR are both multidimensional and multifaceted. Threats like maritime terrorism, drug trafficking, and piracy have acquired international dimensions. StymieingMaritime aspirations of conventional and unconventional threats, the AMAN exercise would help work against human trafficking, narcotics smuggling, and terrorism in the region.

Cooperation between international fleets is essential for fending off growing threats, underscoring the necessity for a strong naval presence. Megaprojects present a wide range of regional and transregional economic opportunities, particularly in the marine sector, and Pakistan, a key player in the Arabian Sea’s maritime security, is completely dedicated to preserving freedom of navigation and the rule of law.

In the harbour phase of Exercise AMAN-23, there will be an international maritime conference, a maritime terrorism demonstration, roundtable discussions on professional topics, and various cross-cultural activities. Duringthe sea phase, advanced naval drills including antipiracy tactics, counter terrorism operations, maritime security operations and an International Fleet Review will be conducted.

With the launch of the AMAN series of exercises, the Pakistan Navy is taking the lead and laying more emphasis on international cooperation in an effort to make the world a safer place. Pakistan’s naval forces actively participate with other fleets in the IOR as a leading nation and significant contributor in the fight against terrorism, narcotics trafficking, people smuggling, gun running, and high seas piracy.

Hence, the strong realization that no one nation can single handedly cope with the quantum of this prevailing threat, making cooperative maritime strategy a matter of compulsion rather than choice and that the importance of this collaboration will enhance with the complete operation of China Pakistan Economic Corridor and Gwadar Port – which are meant to bring prosperity not only to Pakistan but the region and beyond.