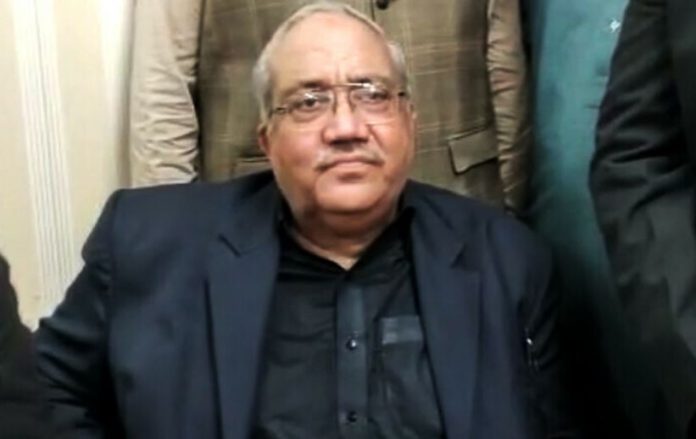 Lahore, OCT 28: A Lahore district and sessions court on Friday sent ARY anchorperson Chaudhry Ghulam Hussain to jail on judicial remand for 14 days in a case pertaining to bank fraud.

Hussain was arrested from Lahore’s Gulberg by the Federal Investigation Agency on Friday.

According to a press release issued by the agency, Hussain took a Rs57 million loan from a bank in 2003 by submitting fake documents.

The anchor’s two sons were also named in the case, the agency said, adding that a banking court in Lahore issued a perpetual warrant (non-bailable warrant) for Hussain.

Earlier today, Hussain was presented before a Lahore sessions court. During the hearing, the FIA submitted a plea seeking 14-day physical remand of the journalist.

“Chaudhry Ghulam Hussain did not return a loan he had taken from a bank,” FIA prosecutor Munim Bashir told the court, contending that the loan was secured by submitting fake documents.

However, Azhar Siddiqui — Hussain’s lawyer — argued that the case was more than a decade old and the first information report (FIR) against his client was registered in 2011. “Will the FIA now work for banks to recover money?”

He said that Hussain had never been accused of submitting fake documents.

“Late at night, 30 to 40 people came to arrest him. Did they come because of a personal grudge,” Siddiqui asked, demanding to know the real reason for arresting the anchor yesterday.

The court then asked the FIA prosecutor about how Hussain was appearing on national television every day if he had been declared a proclaimed offender in 2013.

At that, Hussain’s lawyer said that his client had no role in the case, adding that all the other people named in the case had been released. “Hussain has already returned 47 per cent of the amount as a guarantor.”

Siddiqui went on to say that his client was a journalist and, hence, was being falsely implicated. “Ever since his arrest, Hussain is being defamed.”

Meanwhile, Hussain said that the property in question was worth Rs450 million out of which Rs250 million had already been paid. “This matter is now pending in the Supreme Court,” he added.

Subsequently, the court rejected the FIA’s plea for Hussain’s physical remand and sent the journalist to jail on 14-day judicial remand.

It also instructed the agency to return Hussain’s identity card.