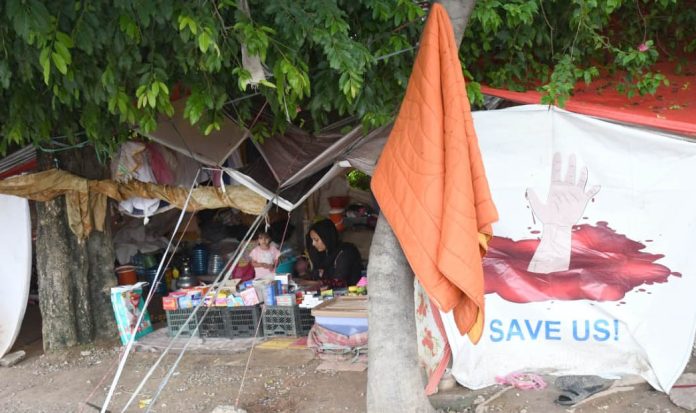 The style of America and its Western Allies is unique. On the other hand, after their departure, a human tragedy took place in Afghanistan. Afghanistan is also one of the countries where the United States has set up human markets after leaving. The rest were abandoned on the streets and intersections in suffering and misery. Several thousand of them have been lying helpless under the open sky for months in front of  the National Press Club Islamabad and Marriott Hotel Islamabad.

These helpless people say that they were illegally brought to Pakistan on the promise that they would be given visas to US and European countries but they were cheated and today they are lying here under the open sky with their innocent children and women. Western powers, including America, have always played a power game in this region, but in the game of politics and power, cheating innocent people in this way is against democracy and humanitarian requirements. Now the question arises whether the American and Western powers are sheltering certain people in their countries They want to impose a new agenda in this region in the future۔

If visas are being given to a few approved families, then the future may be a precursor to some agenda and crisis. Now it is the test of the champions of democracy whether they do justice or prove to be the prelude to impose a new agenda in the future.

In Pakistan, Afghan refugees have been protesting in Islamabad against the US government since the fall of Kabul. They allegedly claim that the Americans and other European countries had promised them and their families for Visas and if they were to head back into Afghanistan, they would be sentenced to death without being given an opportunity to a ‘free and fair trial’.

Afghan citizen have been protesting in Islamabad against US government and its allies since fall of Kabul.Advocate Pir Fida Hussain Hashmi filed a petition at Islamabad high court seeking clarification from the authorities (Ministry of Foreign Office and Interior) the legal position and authenticity for protesting of the Afghan people/refugees in Pakistan for seeking asylum and visa from USA Embassy.

Petitioner Hashmi demanded that these Afghan protestors should be removed because such gathering in Islamabad near the Red Zone is alarming and threatening.

The US Embassy and other concerned authorities have not taken any step to overcome their demands.

Petitioner argued that after the exit of American, NATO and other Allied forces from Afghanistan, the circumstances and demography of the region has drastically changed and in the current situation when the Pakistan is already facing turmoil and threat of terrorism from the different segments, this country cannot afford such like protest in the capital city.

In such a scenario the gathering of Afghan protests in Islamabad near the Red Zone is alarming and threatening but the concerned authorities have not taken any step and even allowed them to be assembled in the green belt near the residential area of ICT, Advocate Hashmi added.

In petition it is argued that the Ministry of Foreign Office and Ministry of Interior is responsible to assist the court that under what law the grievances of Afghan people regarding seeking of asylum and visa of USA can be enforced to the American Embassy in Pakistan and what agreement? Advocate Hashmi further argued that both ministries are responsible authorities and they have to clarify the agreement, treaty or commitment before this honorable court, if executed for such right of asylum for USA or any other country and guarantee for protection of life and what is the validity and authenticity in the eyes of law?

It is also matter of fact that these Afghans are suffering too much here, they have no access to the basic sanitation facilities, health facilities, source of income to ration for everyday supplies and due to the reasons adults, women, young kids, infants are affected day by day and the entire saga is wreaking havoc in the locality and is tantamount to ‘public nuisance’.

It is pertinent to mention that in August 2021, after the complete withdrawal of American forces from Afghanistan about four hundred (400) Afghan people along with their families came to Islamabad without any legal documentation or permission. These Afghan refugees had occupied the green belt area of sector F-6 in the garb of seeking asylum for the United States of America (USA) (Not Pakistan) against protesting the American Embassy. Afghan people claimed that they were promised a ‘safe exit’ from Afghanistan to the USA.