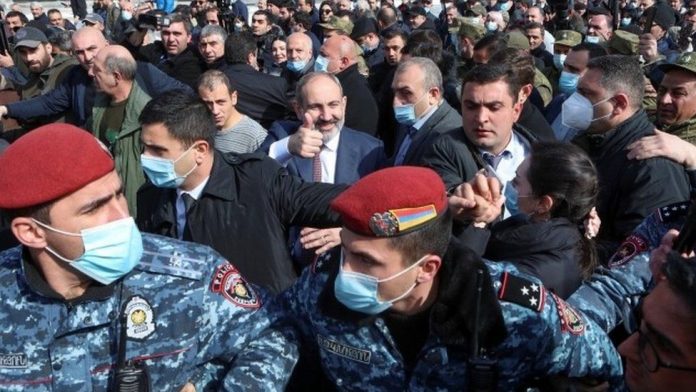 Armenian Prime Minister Nikol Pashinyan has warned of an “attempted military coup”, after the country’s armed forces said he and his cabinet must resign.

YEREVAN: The army “must obey the people and elected authorities,” he told thousands of supporters in the capital Yerevan. The opposition staged a rival rally.

The army has been angered by the PM’s sacking of top military commanders.

Nagorno-Karabakh is an enclave internationally recognised as part of Azerbaijan but which had been controlled by ethnic Armenians since a 1994 truce.

During the bloody six-weeks of fighting late last year, Azerbaijan not only recaptured areas around the enclave but also took the key town of Shusha inside it.

Under the Russian-brokered deal that emerged shortly afterwards, Azerbaijan keeps the areas it has captured. Hundreds of Russian peacekeepers are deployed in the disputed area.

In a Facebook video post on Thursday, Mr Pashinyan, 45, said he considered a statement by the military earlier on Thursday an “attempted military coup”.

He urged his backers to gather on Republic Square in the heart of Yerevan, and was seen shortly afterwards surrounded by thousands of supporters on the streets of the city.

“The army is not a political institution and attempts to involve it in political processes are unacceptable,” he told his supporters.

But he invited the opposition to hold talks on how to resolve the crisis, stressing that any change in power must take place “only through elections”.

Meanwhile, opposition supporters staged a rival demonstration in the capital, insisting that Mr Pashinyan must go.

Vazgen Manukyan, one of the opposition leaders, urged the crowds to start blocking the parliament, saying lawmakers should be brought in to vote for Mr Pashinyan’s dismissal.

“Get ready, we will stay here all night and will block the street with barricades,” he was quoted as saying by the Armenpress news agency.

The prime minister, who has recently survived several attempts in parliament to dismiss him, has sacked armed forces chief Onik Gasparyan and his deputy, Tiran Khacharyan.

Mr Pashinyan, a former journalist, took office after leading a peaceful 2018 revolution in the post-Soviet state.

Mr. Khacharyan had ridiculed Mr. Pashinyan’s claims that Russia-supplied Iskander missiles had failed to hit targets during the fighting in Nagorno-Karabakh.

Russia has a military alliance with Armenia and an army base in the country, but it did not intervene during the conflict. It also has close ties with Azerbaijan and has sold weapons to both countries.

Azerbaijan was openly backed by Turkey during the fighting.

In its statement, the military said “the prime minister and the government are no longer able to make reasonable decisions”, according to the Armenpress.

“For a long time, the Armenian armed forces were patiently tolerating the ‘attacks’ by the incumbent government aimed at defaming the armed forces, but everything has its limits.”

The statement accused Mr. Pashinyan’s government of making “serious mistakes in foreign policy” that resulted in the Armenian state being on the verge of destruction.

Two Armenian opposition parties backed the military’s demand for Mr Pashinyan and his government to resign, calling on the prime minister to avoid a civil war.

In a statement, Armenia’s National Security Service urged all sides to “refrain from actions that threaten national security”.

Russia has expressed concern and called for calm.

PALESTINE NATIONAL COUNCIL (PNC): ISRAEL’S AGGRESSION AGAINST GAZA IS A WAR CRIME THAT MUST BE HELD ACCOUNTABLE