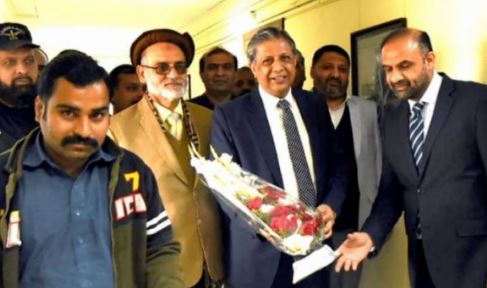 Nazir Tarar will replace Ayaz Sadiq who will be made a committee member, the sources said adding that Naveed Qamar, Asad Mehmood and Maryium Aurangzeb are among the members of the body.

He was reappointed as the federal minister for law and justice and a notification was issued by the cabinet division for handing over the ministry to Azam. Earlier, the premier reconstituted the Cabinet Committee for Disposal of Legislative Cases (CCLC) and Azam became its chief.

Citing a cabinet division notification, a report states: “In terms of rule 3(4) of the Rules of Business, 1973, the prime minister has been pleased to allocate the portfolio of law and Justice to Senator Azam Nazeer Tarar, Federal Minister, with immediate effect. Consequently, Sardar Ayaz Sadiq, the Federal Minister for Economic Affairs and Political Affairs shall cease to hold the portfolio of law and Justice.” DNA